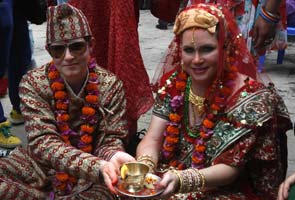 Kathmandu: The first public lesbian wedding in Nepal, held this week under the aegis of the republic's gay rights icon Sunil Babu Pant, has inspired the gay communities in West Bengal and Kerala to seek help to host the two states' first public gay rallies next month.

Pant, who is also Nepal's only openly gay Member of Parliament, founded the Blue Diamond Society (BDS) in 2002 to spearhead the gay rights movement in the then conservative Hindu kingdom where homosexuals faced ostracisation, rape and murderous attacks.

For almost eight years now, it has been hosting an annual gay pride in Kathmandu, a rally in which the community earlier took part wearing masks to hide their identities but is now coming increasingly out in the open.

Pant, who has lobbied for the political parties to field gays during elections and protect their rights in the new constitution, is now being sought by the organisers of similar gay prides in Kerala and West Bengal for guidance.

Deepa Vasudeva, an activist living in Kerala and working with Sahayatrika, an organisation to promote the rights of lesbians, bisexuals and transgenders, says she is a "huge fan" of Pant.

"We are organising a queer pride right now in Kerala on July 2," Vasudeva wrote to Pant, inviting him to be a guest speaker. "Your credentials as an MP with a leftist party in Nepal as well as an openly gay man would be most impressive in Kerala. We are generally trying to find speakers who can help us to gain acceptance and mainstream the issue."

The computer engineer has also been approached by activists from West Bengal, who is planning the state's first gay pride and pride-related events from July 2-17.

Promoted
Listen to the latest songs, only on JioSaavn.com
Pant's work is known in the US and Britain, especially after he hosted two same sex marriages-for a gay couple, one of whom was from India and the other from Britain, and a lesbian American couple.

India's gay community became better acquainted with the lawmaker and BDS after New Delhi-based NGO Crea held a conference in Kathmandu in April - Count me in - bringing together South Asia's marginalised communities.