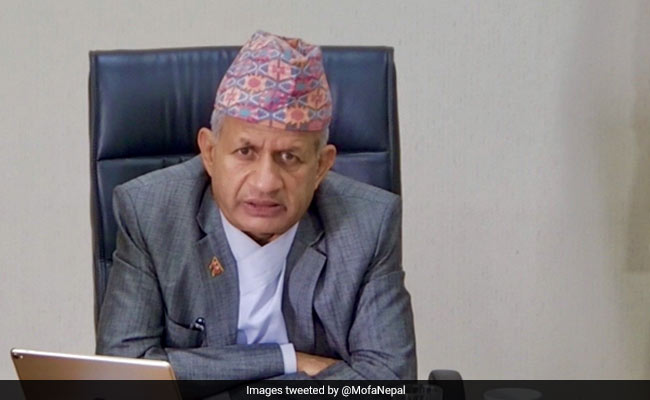 Foreign Minister Gyawali will also meet with the high-level dignitaries of India. (File)

Nepal's Foreign Minister Pradeep Kumar Gyawali arrived in Delhi on Thursday on a three-day visit during which he will co-chair the India-Nepal Joint Commission meeting with his Indian counterpart S Jaishankar, and is expected to discuss COVID-19-related cooperation while reviewing the entire gamut of bilateral relations.

While Ministry of External Affairs Spokesperson Anurag Srivastava asserted at an online briefing that the joint commission meeting (JCM) and boundary talks are separate mechanisms, a Nepalese foreign ministry statement said the sixth JCM on Friday will discuss the whole gamut of Nepal-India bilateral relations, including boundary.

"The Foreign Minister of Nepal arrived in New Delhi a short while ago. He is here to co-chair the sixth session of the India-Nepal Joint Commission Meeting, which will be hosted by our External Affairs Minister tomorrow," Mr Srivastava said.

The Joint Commission is an important mechanism that provides the opportunity of reviewing at a high level the entire gamut of the bilateral partnership and providing political guidance to further enhance the special and unique ties that the two countries enjoy, he said.

"We look forward to constructive discussions on the numerous sectors that encompass our bilateral agenda," he said.

Responding to questions on the border row, he said, "Our position on the boundary issue is well known. Let me say that the JCM and boundary talks are separate mechanisms."

During his visit, Foreign Minister Gyawali will also meet with the high-level dignitaries of India, the statement said.

Gyawali is being accompanied by Nepalese Foreign Secretary Bharat Raj Poudyal and Secretary at the Ministry of Health and Population Laxmi Aryal, according to Nepalese officials.

After Nepal released the map last year, India reacted sharply, calling it a "unilateral act" and cautioning Kathmandu that such "artificial enlargement" of territorial claims will not be acceptable to it.

India said that Nepal's action violated an understanding reached between the two countries to resolve the boundary issues through talks.

The bilateral exchanges that had stalled due to the bitter boundary dispute were reset in the later part of 2020 with a series of visits, as New Delhi emphasised that it sees itself as the Himalayan nation's "foremost friend" and development partner.

Foreign Secretary Harsh Vardhan Shringla's maiden visit to Nepal in November was largely aimed at resetting bilateral ties. Shringla met Prime Minister Oli and other top political brass and emphasised that India and Nepal are on the same page and share the same vision.