Announcing his entry to politics last week, Prakash Raj -- known for films like "Iruvar," "Anthapuram" and "Kanchivaram" -- said he would contest the coming national elections as an Independent candidate from the Bengaluru Central constituency. 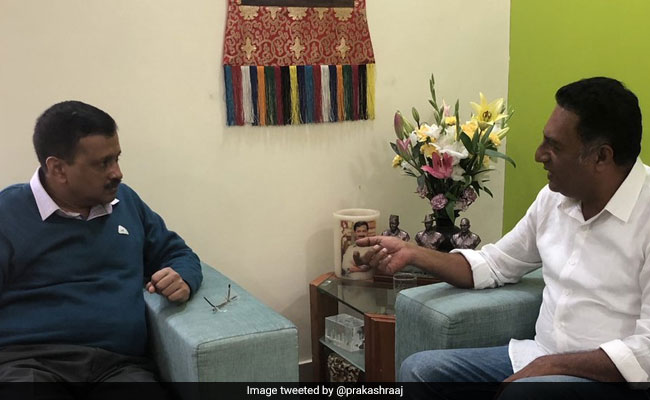 Today, he spoke in support of Congress chief Rahul Gandhi, saying his allegedly misogynistic remarks have been had been taken out of context.

Announcing his entry to politics last week, Mr Raj -- known for films like "Iruvar," "Anthapuram" and "Kanchivaram" -- said he would contest the coming national elections as an Independent candidate from the Bengaluru Central constituency.

Mr Raj too, tweeted about the meeting.

Met delhi CM @ArvindKejriwal thanked him and @AamAadmiParty for the support in my political journey. Discussed and requested to share various ways to address issues which his team has commendably done.. #bengalurucentral#citizensvoice in parliament #justasking in parliament too pic.twitter.com/FJu4OirGWW

We need people like Prakash Raj to enter Parliament.

Prakash ji, it was great meeting u today. AAP fully supports u and we agree wid ur decision to fight as an independent candidate. We need independent and non-partisan voices too in Parliament. https://t.co/M0LO376dG7

Mr Raj has been the third noted actor from southern cinema to turn to politics over the last two years. His predecessors were Rajinikanth and Kamal Haasan, towering figures in the film industry.

Mr Haasan had welcomed Prakash Raj into politics last week, tweeting, "Wishing my friend Mr. Prakash Raj all the very best in his political journey. Thanks for walking the talk". The actor-director-producer had launched his party, the Makkal Needhi Maiam, last year.

The Aam Aadmi Party has also extended support to Mr Raj, saying all good people were "welcome" in politics.