The masked men, surrounded by several policemen, were seen huffing and puffing their way to the finish line, as could be seen in the undated video slowly going viral. 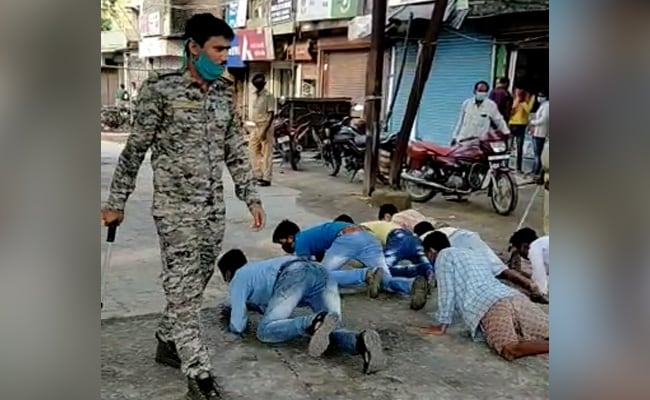 Upon completion of the tasks, the men were cautioned and set free

No it is not a military training drill or even an exercise routine. Close to dozen young men were made to crawl on their elbows and perform frog jumps right in the middle of a market in Bihar's Kishanganj for violating lockdown rules.

The masked men, surrounded by several policemen, were seen huffing and puffing their way to the finish line, as could be seen in the undated video slowly going viral.

The video shows a man in a cap, far behind others, stopping to catch his breath when a policeman lands a swift baton blow on his back, and eggs him on.

Upon completion of the tasks, the men were cautioned and set free.

This is not the first time such a punishment has come to notice.

In the first week of May, police in Depalpur village of Indore in Madhya Pradesh asked a group of people to perform frog jumps to the tune of drums for violating lockdown restrictions.

Earlier today, Bihar Chief Minister Nitish Kumar, after chairing a high level meeting, extended the lockdown in the state till May 25. The earlier lockdown, in pace from May 5, was to end on May 15.

The state, like the rest of the country, has been battling the explosive growth in its COVID-19 incidence since the beginning of April. During the period, its total caseload has risen by nearly three times and exceeded six lakh.

The death count, which on Wednesday crossed 3,500, has also seen a more than three-fold jump during the period. Many sitting and former legislators, top bureaucrats and doctors in the state have lost lives to the virus.

On Wednesday, the state registered 9,863 fresh cases, after having witnessed daily jumps in its tally by a five-digit figure for more than a fortnight.