Amit Shah began is Bihar tour with a BJP rally in the adjoining Purnea district on Friday afternoon and reached Kishanganj in the evening and held a marathon meeting with MLAs, MPs and other office-bearers. 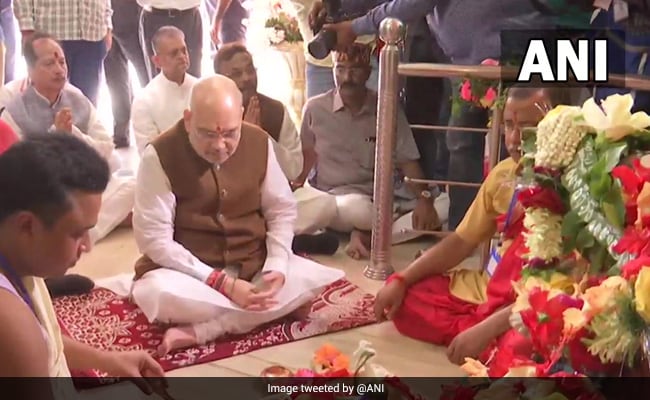 Union Home Minister Amit Shah today offered prayers at a famous temple in Bihar, which has for long been considered as a symbol of Hindu-Muslim unity.

Amit Shah, who had spent the night in Kishanganj district with a Muslim population of more than 50 per cent, reached the "Budhi Kali Mandir" without much fanfare.

The state unit of the BJP shared a video of Shah performing "aarati" and seeking blessings of the priests at the temple, which is said to be more than 100 years old and built on land donated by a Muslim nawab.

The home minister, whose Bihar trip began with a BJP rally in the adjoining Purnea district on Friday afternoon, had reached Kishanganj in the evening and held a marathon meeting with MLAs, MPs and other office-bearers of the state where the party lost power in the last month's upheaval.

He is scheduled to wind up his tour with a meeting with officials of the Sashastra Seema Bal, BJP sources said.