Navy divers detected the body using an ROV at a depth of around 160 feet inside the main shaft on Wednesday last. 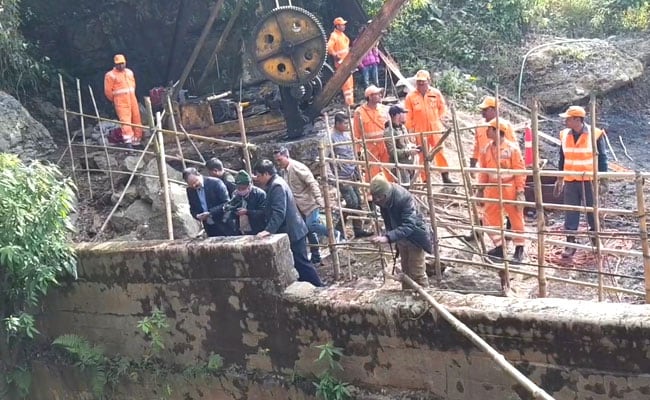 They resumed efforts to pull out the body on Tuesday on the advice of the district administration.

The body of one of the 15 trapped miners, which was spotted last week, has disintegrated and slipped to bottom of the main shaft in course of the Navy's efforts to pull it out of the flooded mine, officials said Wednesday.

The Navy personnel are trying their best to locate the remains with their unmanned Remotely Operated Vehicle (ROV), an official said.

Navy divers detected the body using an ROV at a depth of around 160 feet inside the main shaft on Wednesday last.

They resumed efforts to pull out the body on Tuesday on the advice of the district administration.

The remains of the miner slipped away from the jaw of the ROV while attempting to pull it out of the bottom of the main shaft of the coal mine last evening, operations spokesperson R Susngi told PTI.

It happened due to presence of pipes, cables and debris in the main shaft, he said.

The Indian Navy resumed the search on Wednesday and its efforts to locate the remains have not been successful so far, he added.

The operation to rescue the miners entered the 42nd day on Wednesday.

In the past 24 hours, teams of pump operators from Coal India Ltd, Odhisa Fire Service and Kirloskar Brothers Ltd have discharged over 81 lakh litres of water from the nearby abandoned mines.

Family members of the trapped miners have been waiting anxiously for news of their loved ones and are visiting the site regularly and they are regularly updated on the progress, Susngi said.

The 15 miners disappeared inside the mine on December 13 last year.

According to five miners who had a narrow escape, one of the workers could have accidentally punctured the walls of possibly another nearby abandoned and flooded mine.

The state government has announced Rs 1 lakh interim relief for families of all the trapped miners and the Supreme Court is monitoring the case on a weekly basis. The next hearing is scheduled for Monday.

Promoted
Listen to the latest songs, only on JioSaavn.com
Comments
Meghalaya MinersIllegal Mining In MeghalayaTrapped Miners