PM To Reveal New Naval Flag On Friday, "Doing Away With Colonial Past"

The current ensign features a prominent cross of Saint George, the national flag of England and a legacy from India's colonial past. 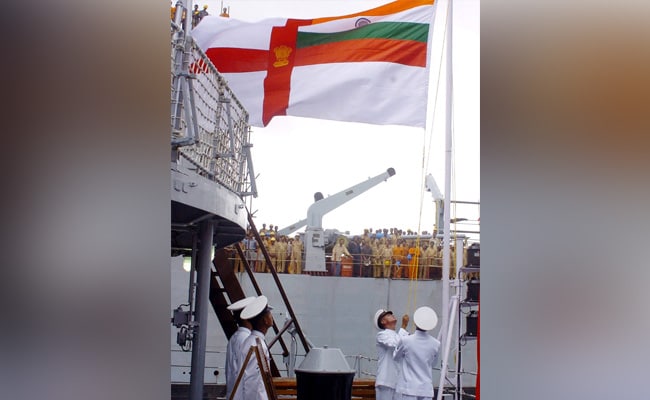 PM Modi will reveal the new design Friday in Kerala.

The current ensign features a prominent cross of Saint George, the national flag of England and a legacy from India's nine decades as a crown dependency, which ended with independence in 1947.

PM Modi will reveal the new design Friday in Kerala at the commissioning of the Vikrant, which his office touted as "a significant step" for military self-reliance.

"During the event, the PM will also unveil the new naval ensign, doing away with the colonial past and befitting the rich Indian maritime heritage," his office said in a statement on Tuesday.

The Saint George cross has been a feature of the naval ensign since 1928, except for a brief spell between 2001 and 2004, when the BJP government of the time replaced it with a blue Indian Navy crest.

It was reintroduced after complaints by service members that the crest could not be easily spotted against the colour of the sky and the ocean, local media reports said.

The Vikrant enters service alongside a smaller aircraft carrier bought second-hand from Russia, which has long been a major arms supplier to New Delhi.

PM Modi's government has sought to wean the country off its dependency on foreign military purchases and build a domestic defence hardware industry.

It has been wary of the strategic challenge posed by China's increasing presence in the Indian Ocean, raising security concerns this month when neighbour Sri Lanka allowed a port visit by a Chinese research vessel accused of spying activities.

India is a member of the so-called Quad alongside the United States, Japan and Australia, a security alliance focused on the Indo-Pacific and aimed at providing a more substantive counterweight to China's rising military and economic power.