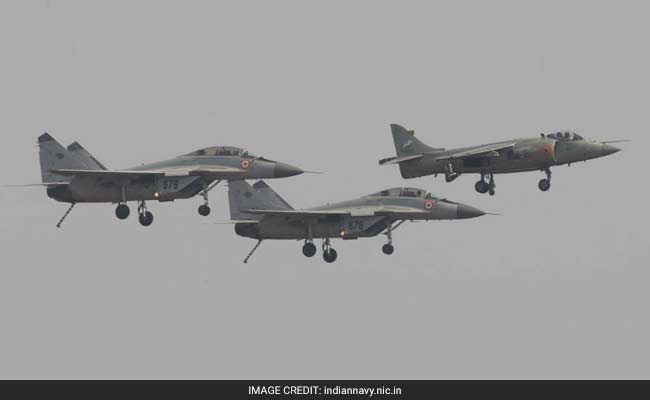 The outgoing Sea Harriers being flanked by the newly inducted MiG 29Ks fighters of the Indian Navy.

"We have great pride in inducting supersonic multi-role MiG 29K aircraft with cutting edge technology into the 300 squadron," Chief of the Naval Staff Admiral RK Dhowan told reporters on the sidelines of an event organised in Goa to 'de-induct' Sea Harriers.

The Navy, which initially had 28 Sea Harriers, today de-inducted 11 remaining ones. The force has till today accepted 31 MiG 29K aircraft of the 45 aircraft that it has contracted for. "As you are aware, the aircraft (MiG 29K) has already been integrated on board aircraft carrier Vikramaditya and will now perform the role of strike fighter and air defence for the fleet in the Indian Navy," he said.

He said the naval aviation is on a threshold of transformation, by inducting additional helicopters and aircraft into the force.

The first three Sea Harriers, flying via Malta, Luxor and Dubai, led by Lt Cdr Arun Prakash, landed at Dabolim on December 16, 1983. This was followed by the first deck landing on the carrier, INS Vikrant, on December 20, 1983.

"The Indian Navy has emerged as a multi-dimensional network force which is ready to take on any challenge in the maritime domain of the Indian Ocean region in the 21st century," Admiral Dhowan said. 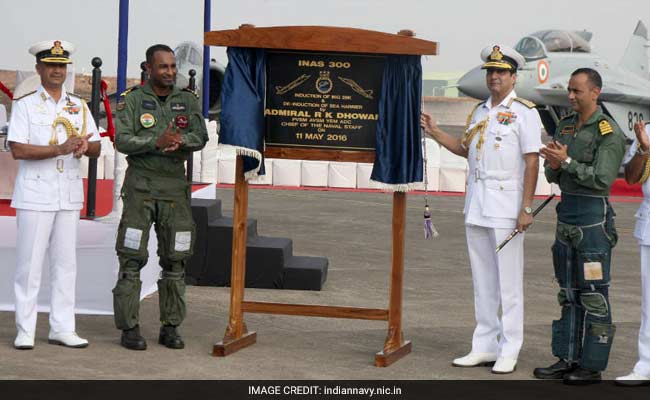 Unveiling of plaque marking the de-induction of Sea Harriers and induction of MiG 29Ks in INAS 300 at INS Hansa,Goa

Responding to a question, he said INS Virat will be phased out in the coming years.

"We are working out details with the Ministry of Defence and it (Virat) will now be phased out in the coming years," he said.

"We have our new aircraft carrier INS Vikrant, which is being constructed at Kochi shipyard and it is scheduled for delivery in the end of 2018," he said.

"Whatever is happening, the Union government is investigating it," he said.

During the 'de-induction' event, the Sea Harriers displayed a vertical landing formation at INS Hansa.

Admiral Dhowan hailed all the pilots who flew Sea Harriers, considered as one of the most difficult aircraft to fly.

"Today is also the day to salute the pilots who flew Sea Harrier aircraft which made a mark for itself by protecting our seas," he added.

Sea Harriers were inducted in the Indian Navy following phasing out of then obsolete Seahawks.