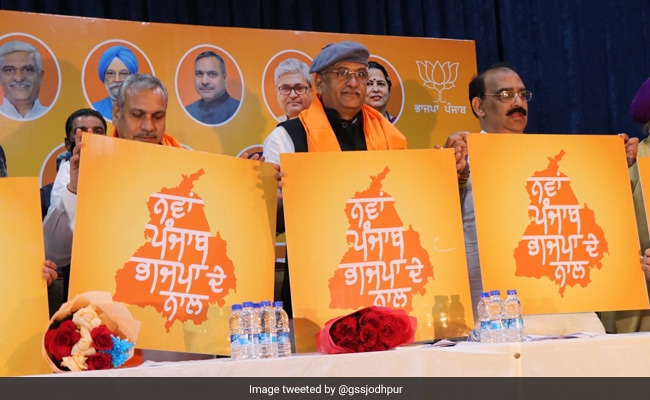 "We do deliver and not merely promise," Union Minister Gajendra Singh Shekhawat said.

Warming to the 2022 state assembly elections, the BJP on Thursday sprung its poll slogan of “Nava Punjab Naal BJP”, saying the party will field candidates on all 117 assembly seats in the state and give due recognition to every section of the society.

Union Minister Gajendra Singh Shekhawat made a mention of his party's new poll slogan -- Nava Punjab Naal BJP (A new Punjab with the BJP) -- while talking to reporters about the BJP's poll strategy bereft of the SAD alliance on the sidelines of a meeting with party's district-level office bearers in Chandigarh.

Dubbing opposition parties Congress, SAD and APP as "totally bereft of any vision to lead the state to prosperity", Mr Shekhawat said, “Punjabis are dissatisfied with the miserable performance of these parties which will be routed at the hustings.”

Elaborating upon various measures taken by the Narendra Modi government in the Centre in the last seven years, Mr Shekhawat said the BJP delivered justice to the Sikhs after 35 years against the injustice meted out to them in the 1984 riots.

Among other pro-Sikh steps taken by the Modi government, Mr Shekhawat recalled scrapping of the “black list” of expatriate Sikhs, the opening of the Kartarpur corridor after the partition and the abolition of GST on the ‘langar' at Harminder Sahib.

Among yet other achievements of the NDA government, Mr Shekhawat listed the establishment of AIIMS at Bathinda and Amritsar, besides PGI satellite centres at Sangrur and Ferozepur.

"We do deliver and not merely promise,” he said while expressing the party resolve to contest all 117 Punjab assembly seats in the upcoming assembly elections in 2022 without any alliance with SAD which walked out of the NDA amid the farmers' protest against the three central farm laws early this year.

“We will go to the people with an outlined agenda of bringing prosperity and opportunity for everyone and commit that the mafia raj will be wiped out in the state," he said.

On the issue of farmers' protests against the farm laws, the Union Jal Shakti Minister said already 11 rounds of talks have been held so far with farm unions and the government took the extra step of stalling the laws for 18 months.

"Our initiative to address the issue can never be doubted. Our doors are always open for talks," he said.

Speaking on the issue of the enlargement of the BSF's territorial jurisdiction up to 50 km inside Punjab from the international Indo-Pak border, Mr Shekhawat said the national security can never be compromised.

Present Chief Minister Charanjit Channi too had recently met the Home Minister and brought up this issue but stepped back owing to political pressure, he said.

This November 8 assembly session is nothing but a strategy to divert people's attention from the main issue of good governance, he said.