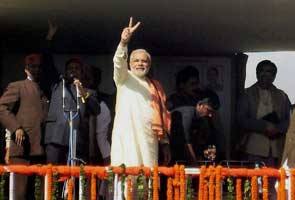 Ahmedabad: Gujarat Chief Minister Narendra Modi today indicated he will seek re-election from Maninagar Assembly constituency and asked BJP workers to work hard to ensure he wins the seat with a record margin.

"Let's have a competition between you (workers) and me. Let's see who comes out on top - you get me elected with maximum margin here or I get maximum seats out of 182 in the state. You worry only about one and I will worry about all other constituencies," he said at a gathering of party workers in his constituency.

In 2007 election, Modi had won Maninagar, which falls in Ahmedabad city, by around 75,000 votes defeating Dinsha Patel of Congress.

BJP is yet to declare its list of candidates for the assembly election to be held on December 13 and 17. At the meet, Modi hit out at Congress and the party-led UPA government at the Centre.

"Congress has created a dirty tricks department whose main work is to indulge in character assassination, publish dirty literature about opponents and spread dirt during elections," the BJP stalwart alleged.

He said, "Congress has allotted budget running into crores to this department, which is part of a conspiracy to blacken democracy. This might give them some sadistic pleasure but it will tarnish the democratic tradition of Gujarat."

"They were boasting about overthrowing my government by using Article 356 (President's Rule); what happened to it? I am standing right here, my government is here. They just want to crush Gujarat," Modi said.

"We enacted a law (Gujarat Control of Organised Crime Act) to protect the people from terrorism. Our assembly passed it five times but Delhi rejected it. Should we have no right to protect our people? Should we let people die of terrorism?" the Chief Minister asked.