India-UK MoUs / Agreements Signed: Delegations headed by Prime Minister Modi and British PM Theresa May held bilateral talks during which the two sides signed multiple agreements. They also announced initiatives, including in the areas of technology, trade and investment. 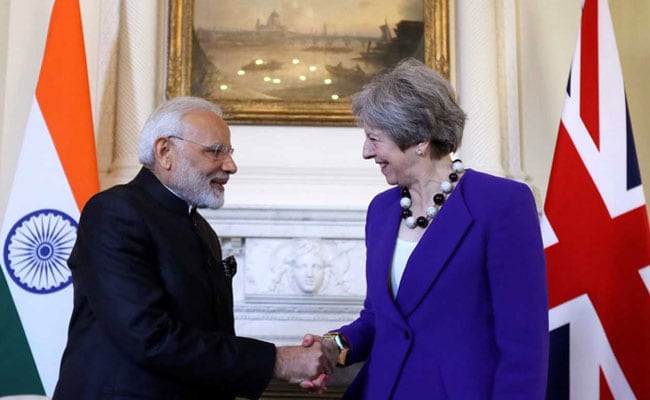 London: Prime Minister Narendra Modi, who is in the UK for the Commonwealth Heads of Government Meeting or CHOGM, met Britain's prime minister Theresa May on Wednesday. The two leaders held wide-ranging talks on deepening India-UK ties. Delegations headed by Prime Minister Modi and British PM Theresa May held bilateral talks during which the two sides signed multiple agreements. They also announced initiatives, including in the areas of technology, trade and investment.

Here are details of the Memorandums of Understanding (MoUs) or Agreements signed between India and the United Kingdom (UK):

1) India and UK have agreed to an overarching cyber-relationship framework, that among others, enables the development of a common and shared understanding of international cyber activity; discuss and share strategies to promote user confidence in the security of Information and Communication Technologies or ICT products and services; promote cyber security product development; and share information relating research and development, etc.

2) On rejuvenation of River Ganga, an MoU has been signed between National Mission for Clean Ganga (NMCG) and Natural Environmental Research Council (NERC), UK. The agreement will enable the United Kingdom to support Government of India in sustainable management of water resources in the Ganga river basin through collaborative programs of research and innovation and exchange of policy experts with the support of UK Water Partnership.

3) The MoU or agreement on Skill Development, vocational education and training between the two governments seeks to promote greater collaboration in domains such as strengthening skill delivery in high demand sectors where UK has technical and skilling expertise, capacity building of institutions by facilitating the links between UK and Indian corporates and institutions, technical assistance for apprenticeships, quality assessment and certification.

4) In the area of regulation of safe nuclear energy use for peaceful purposes, an arrangement has been arrived at between Atomic Energy Regulatory Board of India (AERB) and the Office for Nuclear Regulation of Great Britain (ONR). The arrangement among others will facilitate exchange of safety-related information concerning the regulation of siting, construction, commissioning, operation, radioactive waste management, decommissioning of civil nuclear installations, and preparedness and management of nuclear and radiological emergencies.

5) A Statement of Intent between NITI Aayog and UK's Department of Business, Energy and Industrial Strategy (BEIS) has been signed which will enable the two sides to explore potential for regular engagement on technology co-operation in areas such as electric vehicles, AI (Artificial Intelligence), FinTech, and advanced manufacturing, as well as utilizing AI, big data and analytics capability for evidence based policy making.

7) Recognising the increased threat posed by international criminality because of its increasingly complex nature and the threat posed by organised crime, an MoU on exchange of information for the purposes of combating international criminality and tackling serious organised crime has been signed. The MoU will allow the two parties to establish a mechanism for the exchange of information, which will include criminal records, immigration records and intelligence.

8) An addendum covering research in humanities and social sciences has been added to the 2004 Newton-Bhabha MoU, which supports research and innovation capacities of both sides for long-term sustainable growth.

9) The UK has announced setting up a fast track mechanism to identify and resolve specific issues faced by Indian companies who are either in the UK or looking to establish operations in the UK.

10) The All India Institute of Ayurveda or AIIA, an autonomous organization under the Ministry of Ayush in collaboration with the College of Medicine will set up a centre of excellence in Ayurveda and traditional Indian medicine. An MoU between the two institutions has been signed which will enable among others the development of evidence-based guidelines for integrating Ayurvedic principles and practices with modern medicine, and develop Ayurvedic medical education guidelines for Ayurveda education in the UK.

11) UK-India Tech Alliance: NASSCOM and techUK have set up the UK - India Tech Alliance, which will facilitate collaboration on building future skills in new technologies by nurturing a solid skills base in the UK and India, with the support of both the governments. The alliance will be composed of high-level stakeholders from the technology industry in the United Kingdom and India. The alliance will assist the governments of UK and India to develop policy in relevant areas by providing a forum for regular dialogue and the exchange of ideas, discuss concerns pertaining to the growth of the sector including, but not limited to skills, new technologies and migration.

13) Artificial Intelligence (AI) and Digital Healthcare: The UK and India announced that as partners in the next generation of healthcare, they will collaborate on digital health pilots in India's 'Aspirational Health Districts' by applying UK evidence-based healthcare AI and technology to strengthen healthcare delivery. These pilots will be carried out in the areas of self-care, primary, secondary and tertiary care, including eye care, diabetes and cancer.

14) UK-India Tech Hub: The UK announced the creation of a UK-India Tech Hub. Based in the British High Commission in New Delhi the tech hub will include a network of people and programs designed to facilitate ideas, investment and prosperity for India and the UK. It will focus on the fastest growing sectors, including: cyber security, AI/data, future mobility, digital manufacturing, healthcare, electric vehicles and digital identity.

18) Green Growth Equity Fund (GGEF): The UK and India launched the fund that will leverage City finance to invest in India's growth, announcing Eversource Capital, a joint venture between Lightsource BP and Everstone Group, as the Green Growth Equity Fund Manager. An initial investment of 240 million pounds from both governments will catalyse additional City finance for green projects in India and UK companies will be able to bid for infrastructure projects financed by the Fund. The Fund will invest in renewable energy, clean transportation, water and waste management in India as part of India's flagship National Investment and Infrastructure Fund (NIIF). UK and India contributions are investments that will generate returns for each country.

20) Sector targeting roadmap: The UK and India have agreed to work together on a sector-based roadmap to address trade barriers in life sciences, food and drink and IT sectors.

21) UK-India multilateral trade dialogue: The UK and India will take forward a dialogue under the Joint Working Group on Trade, which will support a shared commitment to the global rules-based system and to the WTO's role in underpinning it.

22) Fast Track Mechanism: The UK and India announced a mechanism to support Indian investments into the UK.

23) Commitment to transition EU-India Third Country Agreements: The UK and India announced that this commitment will ensure continued application to the UK of EU-India agreements during the implementation period following the UK's departure from the EU, and put in place arrangements to replicate relevant EU-India agreements beyond this period.

24) UK-India FinTech Dialogue: The two sides decided on the establishment of a FinTech dialogue to discuss further opportunities for financial services collaboration, including policy coordination.

Additional Forces For Punjab Ahead Of Operation Blue Star Anniversary