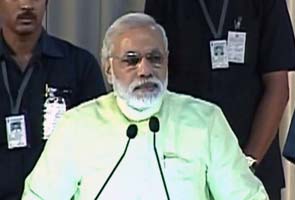 Chennai: Gujarat Chief Minister and BJP's prime ministerial candidate Narendra Modi delivers the Nani Palkhivala memorial lecture on 'India and the World' at the Madras University. Here are the highlights of his speech: