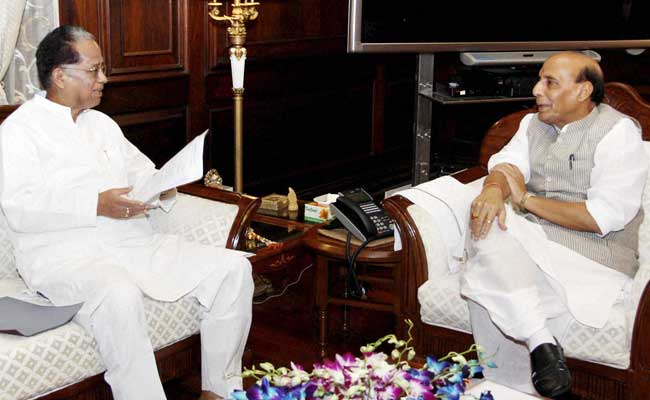 Mr Gogoi met Mr Singh at his North Block office in New Delhi and discussed the Naga accord signed by the Indian government and the National Socialist Council of Nagaland (NSCN-IM).

"The government of Assam has formally conveyed that the accord should not in any way harm Assam's interests," Mr Gogoi said.

"Any extension of the boundary beyond the Nagaland frontier would not be tolerated under any circumstances," he said.

Mr Singh assured Mr Gogoi that no such move was in the offing and that the central government would take Assam into confidence on any matter relating to the Naga accord.

Mr Gogoi also sought Rs 500 crore as immediate financial assistance to meet the challenges of relief, rehabilitation and restoration of communication following the floods in his state.

He gave details of the damage caused by the floods that affected 19 districts, the worst being Kokrajhar, Dhubri, Bongaigaon, Chirang, Barpeta and Goalpara.

"We had to set up nearly 300 relief camps for about two lakh people evacuated from villages," he said about the floods that killed 27 people.

The Chief Minister said that preliminary assessment by the State Water Resources Department revealed that Rs 63 crore would be needed to plug the breaches to embankments.

Assam needed immediate financial assistance to the tune of Rs 500 crore to meet the challenges of relief, rehabilitation and restoration, he said.