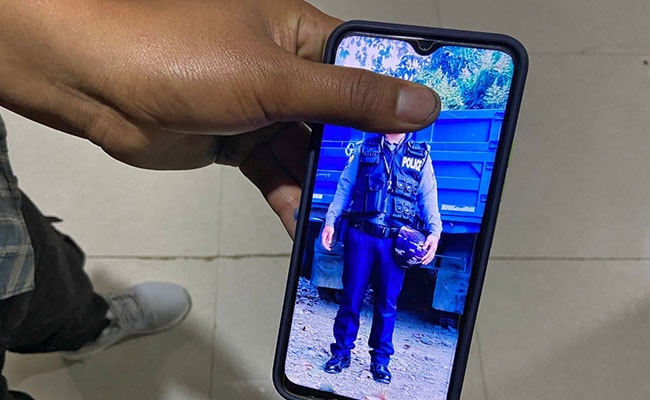 Tha Peng shows his photograph in his phone.

When Tha Peng was ordered to shoot at protesters with his submachine gun to disperse them in the Myanmar town of Khampat on February 27, the police lance corporal said he refused.

"The next day, an officer called to ask me if I will shoot," he said. The 27-year-old refused again, and then resigned from the force.

On March 1, he said he left his home and family behind in Khampat and travelled for three days, mostly at night to avoid detection, before crossing into India's northeastern Mizoram state.

"I had no choice," Tha Peng told Reuters in an interview on Tuesday, speaking via a translator. He gave only part of his name to protect his identity. Reuters saw his police and national ID cards which confirmed the name.

Tha Peng said he and six colleagues all disobeyed the Feb. 27 order from a superior officer, whom he did not name.

Reuters could not independently verify his or other accounts gathered near the Myanmar-India border.

The description of events was similar to that given to police in Mizoram on March 1 by another Myanmar police lance corporal and three constables who crossed into India, according to a classified internal police document seen by Reuters.

The document was written by Mizoram police officials and gives biographical details of the four individuals and their account of why they fled. It was not addressed to specific people.

"As the Civil disobedience movement is gaining momentum and protest(s) held by anti-coup protesters at different places we are instructed to shoot at the protesters," they said in a joint statement to Mizoram police.

"In such a scenario, we don't have the guts to shoot at our own people who are peaceful demonstrators," they said.

Myanmar's military junta, which staged a coup on Feb. 1 and deposed the country's civilian government, did not respond to a Reuters request for comment.

The junta has said it is acting with utmost restraint in handling what it has described as demonstrations by "riotous protesters" whom it accuses of attacking police and harming national security and stability.

Tha Peng's is among the first cases reported by the media of police fleeing Myanmar after disobeying orders from the military junta's security forces.

Daily protests against the coup are being staged across the country and security forces have cracked down. More than 60 protesters have been killed and more than 1,800 detained, the Assistance Association for Political Prisoners, an advocacy group, has said.

Reuters has not been able to confirm the figures independently.

Among the detainees is Nobel laureate Aung San Suu Kyi, who led the civilian government.

Around 100 people from Myanmar, mostly policemen and their families, have crossed over a porous border into India since the protests began, according to a senior Indian official.

Several have taken shelter in Mizoram's Champhai district bordering Myanmar, where Reuters interviewed three Myanmar nationals who said they had served with the police.

As well as his ID cards, Tha Peng showed an undated photograph of him wearing a Myanmar police uniform. He said he joined the force nine years ago. 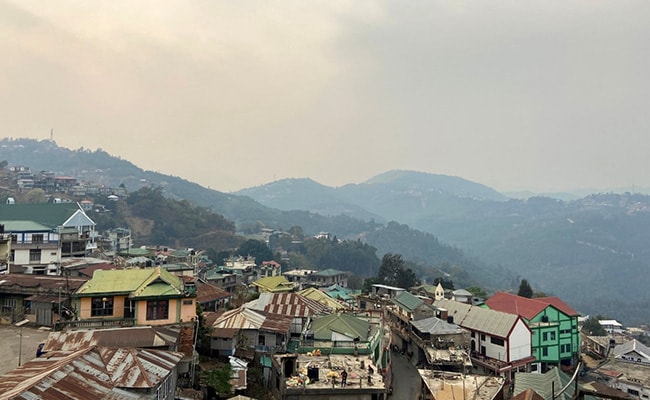 A general view shows Champhai town in India's northeastern state of Mizoram near the India-Myanmar border.

Tha Peng said that, according to police rules, protesters should either be stopped by rubber bullets or shot below the knees. Reuters could not verify police policies.

But he was given orders by his superiors to "shoot till they are dead," he added.

Ngun Hlei, who said he was posted as a police constable in the city of Mandalay, said he had also received orders to shoot. He did not give a date, nor specify whether the order was to shoot to kill. He did not give details of any casualties.

The 23-year-old also gave only a part of his full name and carried his national ID card.

Tha Peng and Ngun Hlei said they believed police were acting under orders from Myanmar's military, known as the Tatmadaw. They did not provide evidence.

The other four Myanmar police agreed, according to the classified police document.

"...the military pressured the police force who are mostly constables to confront the people," they said.

Ngun Hlei said he was reprimanded for disobeying orders and transferred. He sought help from pro-democracy activists online and found his way by road to Mizoram's Vaphai village on March 6.

Although guarded by Indian paramilitary forces, the India-Myanmar border has a "free movement regime", which allows people to venture a few miles into Indian territory without requiring travel permits.

Twenty-four-year-old Dal said she had worked as a constable with Myanmar police in the mountainside town of Falam in northwestern Myanmar. Reuters saw a photograph of her police ID and verified the name.

Her job was mostly administrative, including making lists of people detained by the police. But as protests swelled in the wake of the coup, she said she was instructed to try to catch female protesters - an order she refused.

Fearing imprisonment for siding with the protesters and their civil disobedience movement, she said she decided to flee Myanmar.

All three said that there was substantial support for the protesters within Myanmar's police force.

"Inside the police station, 90% support the protesters but there is no leader to unite them," said Tha Peng, who left behind his wife and two young daughters, one six months old.

Like some others who have crossed in recent days, the three are scattered around Champhai, supported by a network of local activists.

Zuali confirmed she had received the letter, a copy of which has been seen by Reuters.

Zoramthanga, Mizoram's chief minister, told Reuters that his administration would provide temporary food and shelter to those fleeing Myanmar, but a decision on repatriations was pending with India's federal government.

Tha Peng said that although he missed his family he feared returning to Myanmar.

"I don't want to go back," he said, sitting in a first-floor room overlooking rolling green hills that stretch into Myanmar.