JNU student Umar Khalid's father has appealed to his son to surrender before court.

New Delhi: Umar Khalid, a student seen chanting slogans calling for the independence of Kashmir and making remarks in support of terrorist Afzal Guru, remains missing nearly a week after he organized an event that the government has described as "anti-national" at Delhi's Jawaharlal Nehru University or JNU.

Mr Khalid's father today told NDTV, "I don't subscribe to some of the slogans Umar raised..but can praise for Afzal Guru be considered sedition?"

"If the atmosphere is conducive, I will appeal for Umar to surrender," said his father, Sayed Qasim Ilyas, a politician and a former member of banned terror group SIMI, at the family's Delhi home. He said he doesn't know where Umar is since the night of the 10th, when Umar appeared on a television show.

Anti-India slogans were shouted at the on-campus event at Jawaharlal Nehru University or JNU.  Of the six students accused of sedition by the police, only one-  Kanhaiya Kumar - has been found and arrested, commissioning a national controversy. Police searches in cities in Maharashtra and Uttar Pradesh have not located the missing five students including Mr Khalid.

Mr Khalid's father said that he quit SIMI or the Students Islamic Movement of India before it was banned as a terror group.

"I was told 'we will come to your house and kill you, rape you in the name of Bharat Mata,'" said Mr Khalid's sister to NDTV, her face covered to protect her identity. 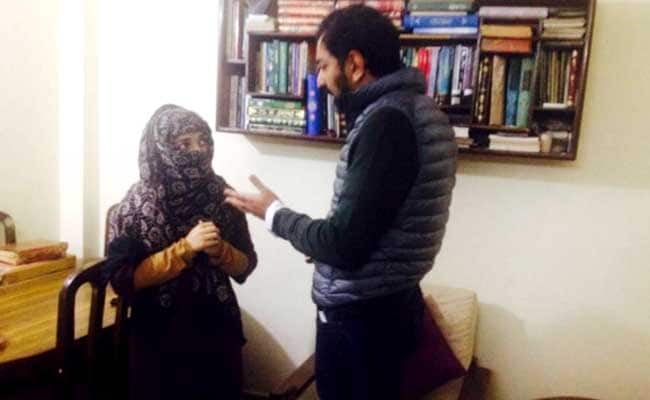 The arrest of Mr Kumar, 28, and the violence effected by a pack of lawyers at two court hearings this week - they say they have the right to punish "anti-nationals" - has polarized the country. The opposition alleges that the government is using an archaic sedition law to crush dissent and restrict free speech.

The ruling BJP and its supporters say students like Mr Kumar and Mr Khalid  cannot get away with making remarks that call for the destruction of India and  in support of Afzal Guru, hanged three years ago for his role in the attack on Parliament in 2001.