"Life Is A Clean Slate Now," Says 'Tandoor Murder' Convict, Out Of Jail

Sushil Sharma said his focus now is to serve his aged parents, who have suffered "for no fault" of theirs. 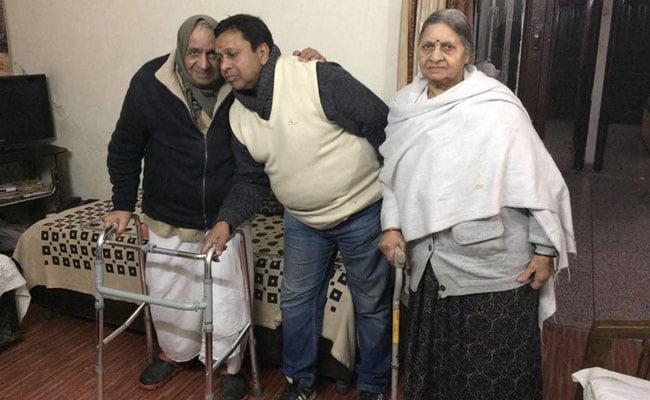 Sushil Sharma with his family at his home after he was released from Tihar jail. (PTI)

Sushil Sharma, who walked a free man last week after serving close to 23 years for killing his wife, said his faith in god helped him serve his jail term.

"I believe in Sai Baba and goddess Durga. I would pray everyday to God and that gave me the hope during my time in jail. Now I have plans to visit Shirdi," Sharma told after paying respects at the Shirdi temple in New Delhi.

On Friday, Sharma was released from Tihar Jail, where he served his sentence for killing his wife Naina Sahni in 1995 and burning her body in a tandoor or oven. Sharma had disposed her body at the roof of erstwhile 4-star hotel Ashok Yatri Niwas, now Royal Plaza, at Ashoka Road in the heart of the capital.

"I also wanted to go to Vaishno Devi with my parents but they are now quite aged and won't be able to travel," he said.

He said his life is a clean slate at this moment and the feeling that he is out of the jail has not yet sunk in.

Sharma, who will be celebrating his 60th birthday on January 24 as a free man, said his focus now is to serve his aged parents, who have suffered "for no fault" of theirs.

"Every day, before going to bed, my father, who is now 85, would think, 'Will I be able to see my son walk out of the jail while I am still alive?'

"My younger brother, who was a first-year student of the Hindu College, died in a road accident in 1978. It was a double tragedy for my family when I was also sentenced. I want to spend maximum time with them as they have gone through a lot despite not being at fault," he said.

Sharma said after he settles his parents, he wants to counsel young couples who are about to get married.

He added that as he looks back, he realises that it was his possessive nature that spelt doom for his marital relationship.

"I admit it was my mistake and I had to suffer for it. In the process, one person lost (her) life and the other's life was similar to death. I have thought about what happened that moment (when he killed Sahni) and what actually led to it and I have learnt my lessons," Sharma said, while standing outside the temple.

Recalling the time he spent in jail, he said he had decided he would commit suicide when he first entered Tihar.

"I was used to a lavish life style before the incident. I had never thought I would go to jail. On the first day in Tihar, I met a DDA official, who was in prison for a dowry harassment case. He asked me, 'How are you?' I told him I was not feeling well and don't feel like living anymore.

"He advised me to chant Gayatri Mantra one-and-a-half crore times and and keep a count of it. I started chanting it everyday and after five years, when I counted, I realised I had chanted it almost five crore times," he said.

Sharma said apart from the Gayatri Mantra, his 'vipassana' sessions too helped him fight the depression. He said vipassana is now a part of his daily routine and he does it every morning and evening and recalls all the mistakes he has committed.

"I interacted with others who were in jail and realised that most of them had committed crimes at the "spur of moment". There are two types of persons - criminals and non-criminals. Non-criminals comprise 90 per cent of Tihar's population.

"Jails are reformation centres and I have seen people who have spent 14 years never coming back because they have again committed a crime. Jails bring out the goodness in you," he added.

Sharma said he was instrumental in ensuring that Tihar Jail started the facility of counselling its inmates and it was during his jail time, he did an analysis of the psyche of those who are there and will use their experiences in counselling people and preventing road rage.

"Couples should at least get three months' counselling when they start conjugal life. I have interacted with a lot of inmates during my time in Tihar Jail and I have written essays on different aspects of relationships and now I will use them in helping young couples deal with the stress of relationships," he said.

Sharma was looking at a bright political career when the tragedy struck. He was the college president in Satyawati College in 1977-78 and had contested as an independent candidate opposite Akhil Bharatiya Vidyarthi Parishad and National Students' Union of India candidates and defeated them.

He was later roped in by the NSUI and fought the DUSU elections twice but lost. Later, he became the NSUI president.

"I had contested the DUSU elections opposite ABVP's Pinky Anand, who is now the additional solicitor general. I was being groomed by my professors to become a leader.   But this was my destiny. But I do not think about how my political career would have shaped up," he said.