My goal is to double US exports: Obama 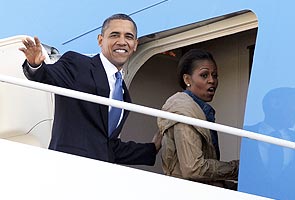 Washington: US President Barack Obama left for Mumbai on Friday, saying he would seek to prise open the Indian market for American businesses during his maiden visit to the country that is expected to give a fresh impetus to bilateral strategic and economic partnership.

In a statement before leaving for his four-nation Asia tour starting with India, Obama said he would be talking about opening up of additional markets in countries like India as American jobs depended greatly on American exports. (Read: Full text of Obama's statement in which he mentions about his India visit)

He said his administration had set a goal of doubling US exports over the next five years to create more jobs back home.

"It is absolutely clear that the key to creating new jobs is opening markets for American goods made by American workers.

"And that is why on the trip I am undertaking, I will be talking about opening up additional markets in places like India," said Obama, close on the heels of Democrats' recent drubbing in US mid-term elections, largely attributed to the discontent over his government's handling of unemployment and economy.

He said focusing on the future, rather than on the "next election" was key to the success of the American future.

"This is a reminder (of the fact) that the most important competition we face in this century will not be between Democrats and Republicans, it is a competition with countries around the world to lead the global economy," he said.

In his Roosevelt Room remarks on the latest job figures, minutes before he boarded Marine One from the White House lawns, Obama said, "Our prosperity depends not just on consuming things, but also on being the maker of things. In fact, for every $1 billion we increase in exports, thousands of jobs are supported here at home."

With the recent election, that has given the control of the House of Representatives to the Republicans heavy on his mind, Obama said political differences cannot be allowed to create a deadlock in the country.

"We can't spend the next two years mired in gridlock... Our future depends on putting politics aside to solve problems, to worry about the next generation instead of the next election," he asserted.

"Other countries, like China, aren't standing still. So we can't stand still either. We've got to move forward," he said.

Earlier, the National Security Council spokesman Mike Hammer, said India is an indispensable partner rising on global stage and that lifting restrictions on export control of high technology items and counter-terrorism measures were on the agenda during summit talks.

The White House also said that it supports and encourages both India and Pakistan to resolve their bilateral issues directly, noting that Islamabad has nothing to fear from Washington's growing ties with New Delhi.

Obama is due to hold talks with Prime Minister Manmohan Singh in New Delhi on Monday.

Hammer said lifting of restrictions on exports of dual use items is something that will come up in the course of Obama's visit to India.

"I don't, again, want to get ahead of ourselves in terms of any potential announcements, but it is complicated, and we're working through it," he added.

Obama too in an interview to the PTI had said these are very difficult and complicated issues.

Obama is leading the largest-ever American business mission overseas on the first leg of his visit.

Obama will hold summit talks on Monday with Prime Minister Manmohan Singh in which the crucial issue of lifting restrictions on export control of high technology items to this country, India's quest for a permanent membership of the UN Security Council, counter-terrorism measures and a joint initiative on clean energy are expected to figure prominently.

US-India Business Council is organising what its president Ron Sommers described as the largest-ever US business mission overseas, with some 240 companies taking part in a commercial summit in Mumbai alongside Obama.

Immediately after the Air Force One touches down at Mumbai airport, Obama will fly to the Taj Hotel, 19th century icon of Indian hospitality and make a statement to commemorate the 26/11 attacks. He will pay his respects to the victims and sign the guest book.

The choice of Taj Hotel, the epicentre of the Mumbai massacre by Pakistani terrorists, for his two-day stay, has been described by Obama in an interview to PTI as a "tribute to the resilience of the Indian people" and to underscore the shared commitment of the two countries to counter terrorism.

The longest foreign outing of Obama's presidency aims to gain out economic benefits for the US.

The President will returns to the US on November 14, a day ahead of a lame-duck congressional session.

Obama is the sixth US President to visit India, and the third successive one since 2000 when Bill Clinton came to the country on a landmark visit.

While Clinton and George W Bush both came to India during their second terms, Obama is heading to the country during the second year of his regime.

Promoted
Listen to the latest songs, only on JioSaavn.com
The President will be in India for three days, the longest single stretch he has spent in any foreign country.

"The primary purpose is to take a bunch of US companies and open up markets so that we can sell in Asia, in some of the fastest-growing markets in the world, and we can create jobs here in the United States," Obama told reporters Thursday.