The Muslim professor whose appointment to Banaras Hindu University's Sanskrit Vidhya Dharma faculty led to protests by students - they claimed a non-Hindu could not teach the subject - has resigned from the faculty and will teach Sanskrit at a different department of the same institution. The move - an apparent compromise between BHU administration and protesting students - comes after a  month-long sit-in protest by students who said a non-Hindu professor could not teach because the faculty intertwined the study of religion and literature.

"Professor Khan has resigned from here. He has expressed an interest in joining another wing in the university that teaches Sanskrit. He gave his resignation yesterday (Monday) evening," Professor Kaushalendra Pandey, who accepted the resignation, said.

"He will join the Sanskrit department of the Arts faculty... As a teacher I can only say it is good that he has got other opportunities," Professor Pandey added.

"...want to tell Professor khan we do not have personal enmity... we wish him well," Shubham Tiwari, one of the protesting students, said. 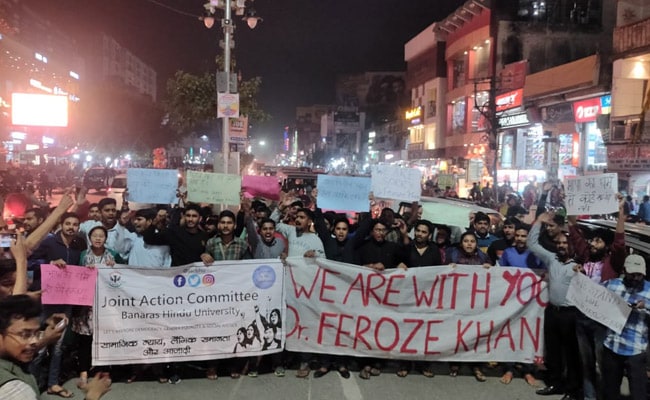 Professor Firoze Khan was posted to the Sanskrit Vidhya Dharma faculty on November 5 but was unable to teach because of the protests. The university, some faculty members and some students were vocal in their support of Professor Khan's candidature.

The panel that selected him, which includes Professor Radhavallabh Tripathi, one of India's most eminent Sanskrit scholars, repeatedly said he was the most qualified candidate.

On Monday another Sanskrit scholar at BHU was allegedly attacked by students for supporting Professor Khan. A senior member of the Sanskrit Vidya Dharam faculty, Professor Lal Shanti said he had stones thrown at him.

"I was sitting in a classroom when some students barged in and started abusing me in foul language. They asked me to stop supporting a Muslim's appointment to the faculty. Some of the students then hurled stones at me... and shoved and pushed," he told reporters today.

Professor Salvi alleged a colleague had instigated the students but refused to name him. He did say, however, that a complaint had been filed with the Vice Chancellor.

A student who was part of the group that accosted Professor Salvi said they only asked him to stop supporting Professor Khan.

Professor Khan has not spoken to the media in the past month.

With 2024 Election Ahead, JP Nadda May Get Extension In BJP Top Post