Muslim Girl Can Marry Once She Completes 15 Years of Age: Gujarat High Court 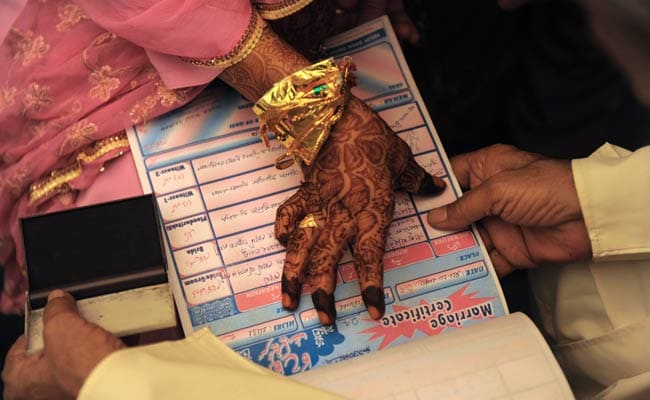 File photo: A Muslim bride puts a thumb impression on a Marriage Certificate during the 'Nikah' ceremony in Ahmedabad. (Agence France-Presse)

Ahmedabad: A Muslim girl can marry when she attains puberty or completes 15 years of age, the Gujarat High Court has said.

The court made the observation while quashing legal proceedings under the Prohibition of Child Marriage Act against a Muslim youth who had married a 17-year-old girl of his community.

Justice J B Pardiwala in the order passed on December 2 said that according to the Muslim Personal Law, a Muslim girl, if she attains puberty or completes the age of 15 years, is "competent" to get married.

"It is not in dispute that the boy and girl both are Muslims. According to the Personal Law of Muslims, the girl no sooner than she attains the puberty or completes 15 years, whichever is earlier, is competent to get married without the consent of her parents," the order said.

The court gave the judgement in connection with a plea filed by a Surat-based youth Yusuf Lokhat seeking to set aside the charge sheet filed against him in a that city's court under several sections of Prohibition of Child Marriage Act, 2006.

"It appears that the parents of the girl have also now accepted the marriage. The man and his wife both are personally present in the Court. They confirm about their marriage. The girl submits that she is happily residing with her husband at her matrimonial home. Having regard to the peculiar facts of the case, in my view, no case is made out to prosecute the criminal proceedings further," the order said.

Promoted
Listen to the latest songs, only on JioSaavn.com
As per the case details, Lokhat married a 17-year-old girl from his community in February this year. Following the marriage, the girl's father, who was initially against the marriage, wrote to a Superintendent of the 'Children Home for Girls' in Surat, who had initiated legal proceedings against the boys and other three persons known to the boy.