Mumbai: Twenty four hours after it was stabbed with its latest terror attack, Mumbai was confronted with an identification parade of the grizzliest of facts. A severed head. A heavily-wired dead body that may have been a suicide bomber. Seventeen dead, 131 injured. And the likelihood that whoever is behind the three rush hour blasts of Wednesday evening has shown what intelligence sources describe as "a level of sophistication" not seen in earlier attacks.

The trio of blasts last evening took place at Dadar, Zaveri Bazaar and Opera House. Home Minister P Chidambaram said this morning, "Intelligence is collected every day, every hour. It (blasts) is not a failure of intelligence agencies.whoever has perpetrated the attacks has worked in a very clandestine manner." (Watch: Chidambaram on Mumbai terror attack)

By the evening, sources said that the group who engineered the blasts knew better than to communicate via phones or emails. It was familiar with Mumbai's commercial areas and understood how to use the heavy Mumbai monsoon to its advantage. Most security cameras at the locations of the blasts, say Mumbai Police officers, have not revealed clues. Umbrellas conceal many faces caught on camera. A steady drizzle makes it tough to spot anything at all for large parts of the footage.

However, intelligence sources have told NDTV that on the CCTV footage from Opera House, three or four people were seen talking on the phone for over an hour and a half at the same spot.  These sources point to the likelihood of sleeper cells of Indian Mujahideen being activated. (Read: Hints of Indian Mujahideen with large gaps)

Amid this grim and unsettling scenario, the Prime Minister and Sonia Gandhi arrived in the city tonight and were briefed on the situation by Chief Minister Prithviraj Chavan. The three leaders then visited blast victims at Saifee and JJ Hospitals.

After his visits, the PM lauded the state administration on its "remarkable coordination of efforts," saying the terrorists had struck this time with the advantage of surprise. (Watch)

The PM said, "I understand the shock and outrage of the people of Mumbai. I share their pain and anguish and anger." (Read: Prime Minister's full statement)

The usual concerns of the two top leaders on diverting attention and security in a crisis have been over-written, according to some political analysts, by the criticism of the Opposition and the residents of the city. "We don't expect anything now," said a young woman headed this morning to her office, located just two minutes away from one of yesterday's targets.

13/7 got added to Mumbai's tragic terror calendar, and the city said what it wants most right now is a ban on references to its "resilient spirit". A city dogged by the demons of terror - four major attacks in the last eight years - said it has no choice but to pick up the pieces and get back to work. So, local trains were full, the ubiquitous taxis were seen all over, the stock market traded as usual.

Behind those scenes, a grainy picture is gradually emerging of how the blasts took place - sophisticated Improvised Explosive Devices (IEDs) were used; they were triggered by alarms set on cellphones. No SIM cards have been found at the locations of the blasts. Two of the bombs used over a kilo of ammonium nitrate. Officers from the National Investigating Agency (NIA) spent all night and much of the day examining the locations of the blasts. (Read: Hints of Indian Mujahideen with large gaps) 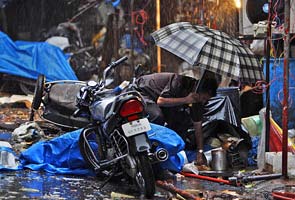 Mr Chidambaram referred this morning to a severed head being found. Union Home Secretary RK Singh said a corpse in JJ Hospital had wires attached to it. He said he could not yet say if this was a suicide bomber, or a victim who was standing so close to the explosion that parts of the explosive clung to him.

The most powerful blast of the three was at Zaveri Bazaar, but the one at Opera House - a hub for diamond traders - had the maximum impact because of the way the explosive was placed. Eleven people were killed and 73 people were injured at this part of South Mumbai.

So far, nobody has claimed responsibility for the blasts. Mr Chidambaram said it is critical to avoid any speculation about who is behind the attack. (Read: Not an intelligence failure, says Chidambaram)

Slamming the government for not adopting a zero-tolerance policy on terror with Pakistan, Mr Advani said, "Mumbai has become a favourite target of terrorists - whether they are from neighbouring countries or from here." The BJP leader said, "Even if Indian Mujahideen caused these new blasts, they get their support from Pakistan." (Read: Repeated Mumbai attacks prove policy failure, says Advani)

Promoted
Listen to the latest songs, only on JioSaavn.com
(Watch live video of our complete coverage)