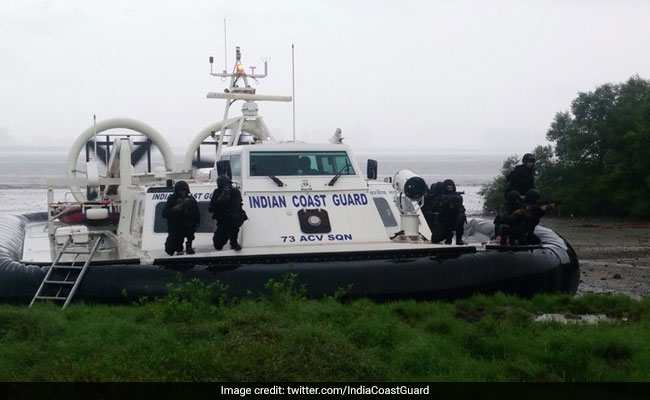 Operations were conducted in coordination with the costal state authorities. (Representational)

Every six months, the ICG conducts such a security exercise with one of the coastal states, he said on the eve of the 13th anniversary of the terrorist attack.

"Post 26/11, the Indian government brought in various reforms...We have conducted more than 300 coastal security exercises and operations in coordination with the costal state authorities since 2009," he said on the sidelines of the 19th National Maritime Search and Rescue Board meeting in Delhi.

"Sometimes, we manage to get two coastal states together and manage to do the exercise. As a result of which, everyone has developed the skills and competencies (to deal with terrorist threat)," he added.

On November 26, 2008, 10 Pakistani terrorists arrived by the sea route and opened fire indiscriminately at multiple places in Mumbai killing 166 people, including 18 security personnel, and injuring several others, besides damaging property worth crores.

Mr Natarajan said synergy and coordination is the only mantra that will ensure that no incident like 26/11 happens in the future.

"That is why you could see that so much drugs have been apprehended (by the ICG in the last two years). That is the evidence that the mechanism that has been put in place by the ICG in coordination with various other agencies is effective and it will continue to deliver good results," he added.

In the last two years, around Rs 15,000 crore worth of drugs have been apprehended not only by India, but also by Sri Lanka and Maldives, he said.

Coming to the point of drug smuggling, we all know that most of the consignment comes to India through the Makran coast (in Pakistan), he said. "We have a certain amount of information and intelligence towards that."

The ICG works in close synergy with various agencies and as a result of which, it continues to maintain the surveillance of sensitive borders, be it with Pakistan, Sri Lanka or Bangladesh, he informed.

"Our presence has always been there and we continue to put almost 40-44 ships and 10-12 aircraft to maintain surveillance over 2.1 million sq km," he added. As a result, in the last two years, the ICG has arrested more than 3.5 tonnes of drug coming through the sea route, the ICG director said.

Mr Natarajan said the drug smuggling activities that used to take place to the Gujarat coast and off the Lakshadweep coast have moved away beyond the equator.

"That is the success, not just for the ICG but various other agencies such as the Narcotics Control Bureau (NCB), state fisheries authorities, port authorities and state intelligence agencies," he said.