Mumbai weather updates: There is extensive waterlogging in the city and floodwaters have entered houses in Kandivali and other low-lying areas today. Suburban railway tracks have been flooded in many areas. 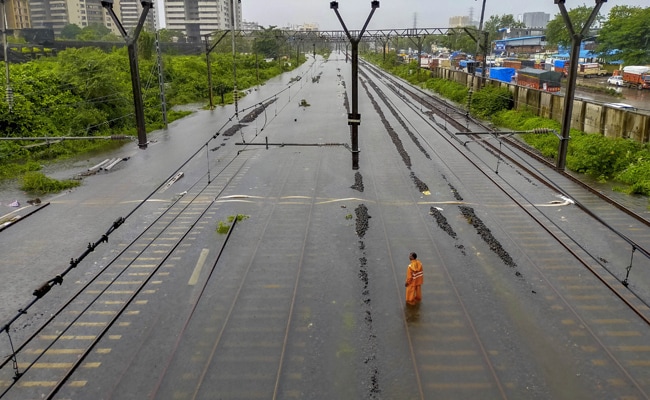 Mumbai rain updates: The weather office has issued a 'Red' alert for Mumbai, Thane, Raigad, and Palghar for the next 48 hours after nonstop rain in the region. Places in North Konkan and interior Maharashtra will also get heavy rain, the weather office said. There is extensive waterlogging in the city and floodwaters have entered houses in Kandivali and other low-lying areas today.

"It's a flood-like situation and the Mithi river had swelled up, crossing the danger mark, in the morning. 230 mm rainfall occurred in 10 hours. As of now, it is flowing below danger level...," the Mumbai civic body commissioner told news agency ANI. Bus and train services have been severely affected due to continuous rain and people have been asked to stay home. Offices in the city to remain shut today.

230 mm rainfall occurred within 10 hrs. It's a flood-like situation. Mithi river had swelled up in the morning because of heavy rains, crossing the danger mark. As of now, it is flowing below danger level. The evacuation of people has also been stopped right now: BMC Commissioner https://t.co/WD3WzQY8oJpic.twitter.com/KDJDFMa2n7

"Dadar and Prabhadevi saw waterlogging due to high tide and heavy rain on Tuesday. The special suburban train services are being run between Virar, Andheri and Banda, and have been suspended from Bandra to Churchgate," the Brihanmumbai Municipal Corporation (BMC) said.

The BMC has deployed high power water pumps in Byculla, Bhandup and some other areas which are severely waterlogged, a civic official said.

A high tide of 4.45 metres is expected at 12.47 pm in Mumbai, according to the IMD. The Western Express Highway was also blocked in Mumbai's Malad area due to landslides.

One person was electrocuted accidentally this morning after he touched an electric pole in Thane, news agency Press Trust of India quoted the police as saying. In another incident, a part of the ceiling of a building in a housing complex crumbled; luckily no one was injured, Thane Municipal Corporation's regional disaster management chief Santosh Kadam said. Throughout the night, fire stations in Thane received more than a dozen calls about tree falling in various areas. Heavy rain pounded Mumbai, Thane,Raigad, Palghar and neighbouring areas since Monday night, throwing normal life out of gear.