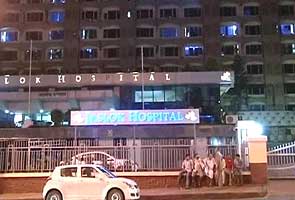 In picture: Mumbai's Jaslok Hospital, where the 22-year-old survivor is recovering

Mumbai: "Rape is not the end of life. I want strictest punishment for all the accused and want to join duty as early as possible".

This is the message the young photojournalist has sent out from her hospital bed to people who feel outraged at her gangrape by five men at the abandoned Shakti Mills compound on Thursday evening.

"She is recuperating from her injuries and trauma. She is still not completely out of trauma but she is composed," said Nirmala Samant Prabhawalkar, a member of the National Commission for Women, who met the 22-year-old survivor convalescing at Jaslok Hospital.

Promoted
Listen to the latest songs, only on JioSaavn.com
Reflecting the toughness and strength of character, the journalist, working as an intern with an English magazine, also wants to be back on duty.

"I want to join duty as early as possible," the survivor, who was sexually assaulted while on an assignment, told Ms Prabhawalkar.
Comments
Mumbai gang-rapesurvivor

Meghalaya Appeals For Calm After Posters Target Bengalis In Shillong