Isha Ambani, who is on the boards of Reliance Jio and Reliance Retail, will continue to be part of her family business, say reports. 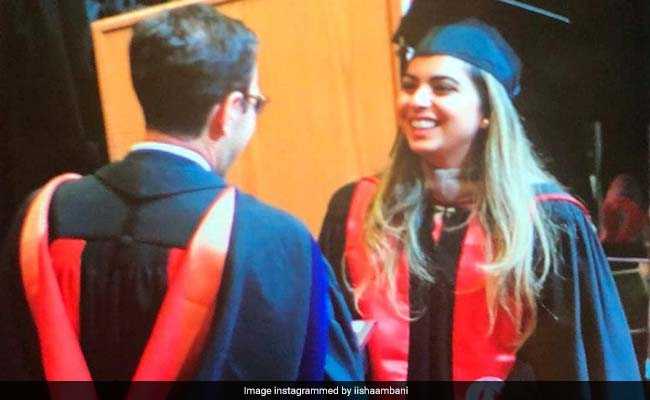 Isha Ambani is now an MBA from the Graduate School of Business in Stanford University.

She is among the 2,460 students who have been awarded a master's degree this year. According to reports, the 26-year-old, who is on the boards of Reliance Jio and Reliance Retail, will continue to be part of her family business.

Isha Ambani holds a bachelor's degree in psychology and South Asian studies from Yale University and is now an MBA from Stanford University. She has also worked as a business analyst at McKinsey and Company. She led the employee launch of Jio's 4G services and is credited for instilling a culture of youthful dynamism in the businesses related to Reliance Jio and Reliance Retail.

Promoted
Listen to the latest songs, only on JioSaavn.com
In 2015, she was named among the Forbes' list of 12 "power businesswomen" from Asia "who are on their way to forging stellar reputations in their industries" and was also among the youngest business leaders to be present at World Economic Forum meeting that year.

Isha is engaged to Anand Piramal, son of Ajay Piramal who is the chairman of the Piramal Group of companies. The two are expected to tie the knot this winter. Her brother Akash Ambani will also marry his childhood friend Shloka Mehta later this year.