The BJP has termed the Congress' reaction on the video of the Madhya Pradesh minister as "the perversion of the minds of Congress leaders". 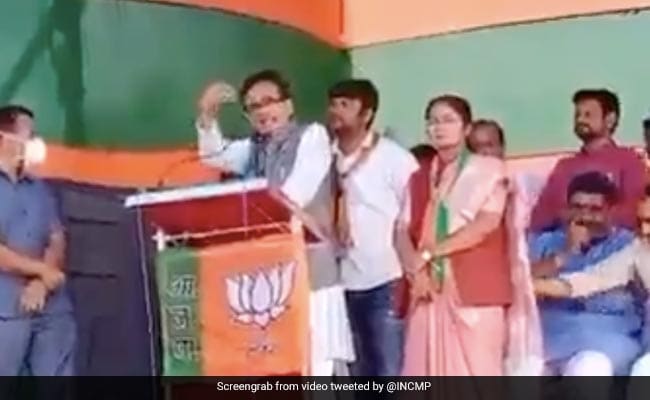 The incident occurred during a rally of Madhya Pradesh Chief Minister Shivraj Singh Chouhan in Raigaon.

A Madhya Pradesh minister's act of removing his spectacles stuck in the hair of the woman candidate of the Bharatiya Janata Party (BJP) during campaigning for the upcoming assembly bypoll in Raigaon in Satna district has created a row, with the Congress demanding action for the "indecent" act.

The incident occurred during a rally of Madhya Pradesh Chief Minister Shivraj Singh Chouhan in Raigaon.

However, the BJP has termed the Congress' reaction as "the perversion of the minds of Congress leaders".

The video purportedly shows state Mining Minister Brajendra Pratap Singh searching his spectacles in his pocket while a person sitting next to him points that the eyeglasses of the minister are stuck in the hair of the woman candidate of the BJP. Later, the minister, sitting behind the woman candidate, who is seen standing near Mr Chouhan who was delivering a speech, takes out his spectacles from her hair.

The video was widely shared on social media.

Attacking the BJP, the Congress alleged the minister inappropriately placed his hand on the woman candidate and shared a photograph.

The Congress also posted the video and the picture on its official Twitter handle.

The photo shared by the Congress shows the minister's elbow touching the BJP nominee sitting next to him while he is talking to the chief minister.

"The BJP only pretends about women empowerment but the video and picture showed the reality. The mining minister not only touched the BJP candidate's hair but also inappropriately placed his hand on her," state Woman Congress president Archana Jaiswal said in a statement.

Asking why the BJP, which claims to be a cadre-based disciplined party, didn't take any action against Mr Singh, Ms Jaiswal said such people should not hold the dignified post of minister in the state cabinet.

"This is not only a perverted mindset but also an insult to a Dalit woman candidate. This is the tradition of Congress," he said.

The byelection to the Raigaon assembly seat is necessitated due to the death of sitting BJP MLA Jugal Kishore Bagri.