Addressing a press conference, senior BJP leader and former Union minister Prakash Javadekar listed various cases of alleged corruption against NCP and Shiv Sena leaders, and accused the MVA government of having effected criminalisation of politics in the state during its two years in office. 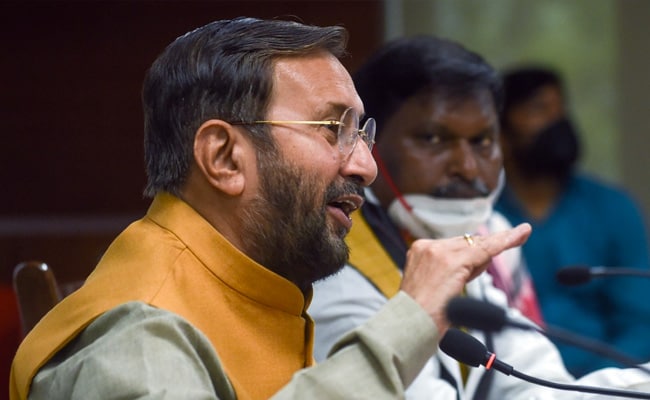 The BJP Sunday hit out at the Shiv Sena-led Maha Vikas Aghadi (MVA) government on the completion of its two years in office, calling it the "most corrupt, opportunist, anti-people and useless" dispensation ever seen in Maharashtra, and said Uddhav Thackeray has remained an "accidental and absentee" chief minister.

Addressing a press conference, senior BJP leader and former Union minister Prakash Javadekar listed various cases of alleged corruption against NCP and Shiv Sena leaders, and accused the MVA government of having effected criminalisation of politics in the state during its two years in office.

"There is nothing worth praising about the two years of this government. It has been most corrupt, opportunist, anti-people and useless government ever in Maharashtra," he said.

Lashing out at Mr Thackeray, Mr Javadekar said the people of Maharashtra had given their mandate to Shiv Sena-BJP alliance in the 2019 assembly polls but the Shiv Sena chief chose to join hands with rival NCP and Congress only to become the chief minister of "the most corrupt" dispensation in the state.

"People call it 'Maha Vasulia Aghadi Sakar' (an extortionist government). I want to give it a new name --'Maha Vishwasghati Aghadi Sarkar' (an unfaithful government)," the BJP leader said.

Separately, Chief Minister Thackeray said in Mumbai that most part of his government's two years was spent on COVID-19 management and that the Maha Vikas Aghadi (MVA) succeeded in turning the crisis into an opportunity.

In a statement to mark the completion of his two years in office, Mr Thackeray (61), who is recuperating in a private hospital after a spine surgery, thanked the people for supporting his government in all its endeavours and said it is the ''people's government''.

Attacking the MVA government on the issue of corruption, Mr Javadekar said "several" ministers, MPs and MLAs of the ruling Nationalist Congress Party (NCP) and Shiv Sena are being probed for corruption.

"While the income tax raids at a prominent NCP minister's residence revealed 'benami' property worth Rs 1000 crore, another NCP minister was arrested for kidnapping and assaulting a common man," the BJP leader said without taking any names in an apparent reference to deputy chief minister Ajit Pawar and Maharashtra housing minister Jitendra Ahwad respectively.

"One NCP minister purchased land at a throwaway price from underworld don Dawood Ibrahim's associate who was involved in 1993 serial bomb blast in Mumbai," he also alleged, without taking any names.

On November 9, Leader of Opposition in the Maharashtra Assembly Devendra Fadnavis had alleged that state minister Nawab Malik and his family members had entered into land deals with people associated with the underworld, days after Mr Malik had sought to link the BJP with an alleged narcotics dealer by tweeting the latter's photograph with the former chief minister's wife Amruta Fadnavis.

"Corruption and criminalisation of politics is the hallmark of this (MVA) government," Mr Javadekar charged and alleged that one of the ministers from the party was involved in a land deal for construction of a resort in Maharashtra in violation of Coastal regulation zone (CRZ) rules.

Attacking Mr Thackeray, the BJP leader said, "He is a case of accidental and absentee chief minister. He does not come to his office."

"People had voted for the Shiv Sena-BJP alliance in the name of Narendra Modi. But after the poll results, he (Thackeray) betrayed people and joined hands with rivals of Modi and formed a coalition government only to become chief minister for corruption, extortion and demolition of law and order situation in the state," he added

Mr Javadekar said that an an allegation has been levelled against Mr Thackeray that he did furnish correct details of his assets in his poll affidavit.

"A probe into the allegation against him is on."

Mr Javadekar alleged that that there is "a complete lawlessness" in Maharashtra, claiming that more than 700 women have been raped in Mumbai alone.

"People can understand the level of lawlessness where the home minister remained absconding for six months and is now in jail. Mumbai police commissioner accused ruling dispensation of extortion to a huge extent. This is the low point of governance in Maharashtra," he added.

The BJP leader also hit out at the MVA government over fuel prices, saying while it has reduced excise duty on foreign liquor "substantially', it is yet to slash VAT on petrol.

While thousands of farmers have committed suicide in the state, the farmers, affected by weather events, have not yet received any "meaningful assistance", he alleged, and also hit out at the MVA government on the issue of OBC and Maratha reservation. .

"All this is happening because this government was formed with the sheer hunger for power keeping aside all morals and betraying the people's mandate. The NCP and Congress also betrayed people as they had sought their votes to defeat Shiv Sena but joined hands with the party because of their hunger for power," he said.