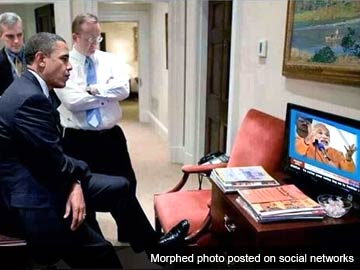 Washington/New Delhi: "Even Obama listens (to) the speech of NaMo," says the caption of a doctored picture showing the US President watching a Narendra Modi speech on TV. The photograph is being circulated on social media.

The original photo was taken in January 2011 and captured President Obama in the White House watching a televised speech by then Egyptian President Hosni Mubarak.

In the doctored picture, Mr Mubarak has been replaced by the BJP's prime ministerial candidate, Mr Modi. The Gujarat Chief Minister is seen delivering a speech, which is being watched on a small television screen by Obama and his team.

Among others, the picture was shared by BJP Member of Parliament from Navasari in Gujarat C R Paatil.

Promoted
Listen to the latest songs, only on JioSaavn.com
When contacted, Mr Patil said he was not aware that the photograph was morphed. He said it had been shared with him on Facebook and he had forwarded it without verifying its authenticity.