Mr Bhagwat along with Rashtriya Swayamsevak Sangh (RSS)general secretary Bhaiyyaji Joshi arrived at a polling booth at Bhauji Daftari School in Mahal area around 6.50 am. 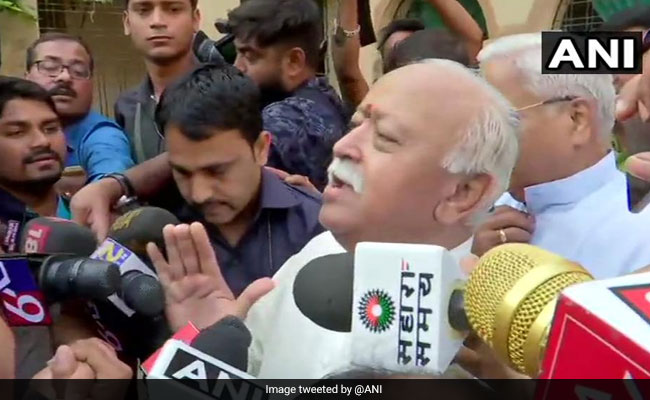 Mohan Bhagwat appealed people to come out to vote in large numbers.

RSS chief Mohan Bhagwat was among the early ones to cast his vote on Thursday for the Lok Sabha  polls in Maharashtra's Nagpur constituency, where Union minister Nitin Gadkari is the BJP's candidate.

Mr Bhagwat along with Rashtriya Swayamsevak Sangh (RSS)general secretary Bhaiyyaji Joshi arrived at a polling booth at Bhauji Daftari School in Mahal area around 6.50 am.

Talking to media-persons after exercising his franchise, Mr Bhagwat appealed people to come out to vote in large numbers.

"Voting is necessary and a sacred responsibility of all. Vote for national security, development and identity," he said.

On the None of the Above (NOTA) option available to voters on the electronic voting machines (EVMs), he said one has to say what he/she wants.

"Being quiet does not work, you have to say yes or no," he said.

Mr Joshi also appealed people to support voting. People should express their choice, he said, and urged them to vote for the candidate whom they think is suitable.

"I hope the government elected after polls will work in the interest of the nation," he added. Polling for the first phase of Lok Sabha elections began in the morning in Maharashtra's seven constituencies Nagpur, Wardha, Ramtek, Bhandara-Gondiya, Chandrapur,Gadchiroli-Chimur and Yavatmal-Washim.

All these constituencies are located in the state's Vidarbha region.

The Congress has fielded Nana Patole, a former BJP MP, from Nagpur seat.