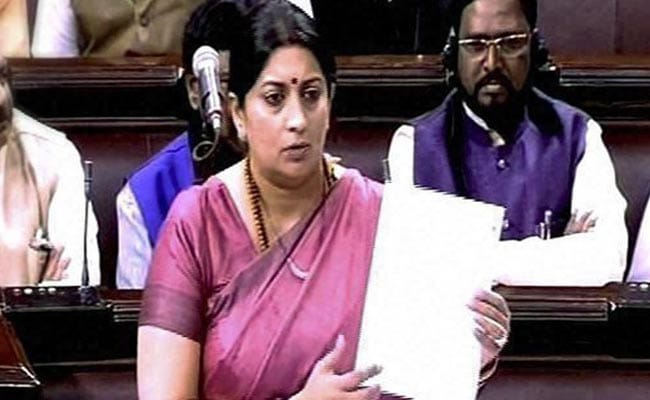 HRD Minister Smriti Irani claimed that no one allowed a doctor near Rohith Vemula to revive him.

"The statement given by HRD Minister Smriti Irani in Lok Sabha during the discussion under rule 193 on the situation arising out of recent incidents in institutions of higher education in reference to Jawaharlal Nehru and Hyderabad University on February 24, 2016 have glaring inconsistencies.

"Using the opportunity to speak as a Minister during reply, she misled the entire nation by a statement which is far from truth and factually incorrect," Mr Salim said in his notice.

"This is a clear case of breach of privilege. I would like to request you to take appropriate action by allowing this notice," he said.

The CPI(M) lawmaker said the HRD minister in her statement in Parliament on February 24 asserted that the February 9 incident was investigated by JNU and its various bodies and, after full deliberations, the students who shouted "anti-national" slogans were found guilty.

This assertion is "incorrect" as it relies on the reporting of an enquiry process which is not credible for several reasons, Mr Salim said.

He noted that the high-level enquiry committee (HLEC) was formed by the University on February 11, 2016 "without any terms of reference and by superseding the Proctorial committee (which is the designated committee to enquire into any such incidents as per JNU statutes" on the same day.

"On Feb 12, 2016, the HLEC opined that 8 students were involved in one or more of the following four acts: misrepresentation of facts, forcefully holding a meeting, creating a law and order situation, shouting unconstitutional slogans/derogatory remarks about the nation. Following which it issued an order of academic suspension to these students.

"This decision was arrived at in less than 24 hours of the formation of the Committee. It did not fix any specific responsibility and based their claims on a video footage whose credibility is questionable," he said.

The CPI(M) leader, in his notice, also claimed the students against whom the decision of academic suspension was taken were not even given a chance to be heard by HLEC members.

On Ms Irani's claim on Mr Vemula's alleged suicide case that "no one allowed a doctor near this child (Rohith), to revive this child. Instead, his body was used as a political tool", Mr Salim quoted a student Zikrullah's Facebook post, which said that a doctor and police were present when Mr Vemula was declared dead.

"I was the person who called health center immediately after learning that Rohith hanged in NRS hostel. Within 5 minutes CMO Health center Dr Rajashree P has reached the spot and she checked the pulses and declared him dead.

"There were Telangana police also present there. Today MHRD minister lied to entire nation that no doctor and police were allowed to check the dead body till 6:30 AM of next day.(sic)," Mr Salim quoted Zikrullah's Facebook post.

The CPI(M) lawmaker noted that while Ms Irani had said in the House that "the ones who passed judgment are not the ones appointed by the BJP-led NDA but by the Congress party", the fact is "the ones who passed the judgment were the sub-committee of the Executive Council. It is the Vice Chancellor, P Appa Rao, an appointee of the NDA, who had constituted this committee."