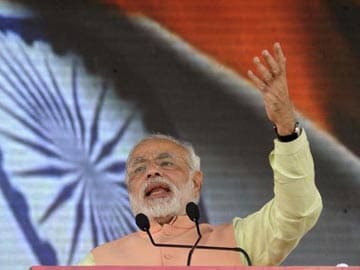 New Delhi: Narendra Modi is building the world's tallest statue at a cost of almost $340 million (Rs 2074 crore) in honour of one of the country's founding fathers, a project he is using to undermine his chief rivals, the Gandhi-Nehru political dynasty.

The statue of Sardar Vallabhbhai Patel, who was first Prime Minister Jawaharlal Nehru's deputy and his Home Minister but often at odds with him, is to be built on a river island in Gujarat, the home state of both Sardar Patel and Mr Modi.

Mr Modi, who is Gujarat's Chief Minister and the leading Opposition candidate for Prime Minister in general elections due next year, is to inaugurate the construction of the statue on Thursday, the 138th birth anniversary of Patel.

The statue, twice the size of the Statue of Liberty, is seen as a not-so-subtle bid by Mr Modi and his Bharatiya Janata Party (BJP) to appropriate an Independence-era hero associated with the ruling Congress party that has largely been run by the Nehru-Gandhi family.

Mr Nehru, his daughter Indira Gandhi, and grandson Rajiv Gandhi, were prime ministers and the family has ruled for more than half of India's 66 years as an independent nation.

Rajiv Gandhi's widow, Sonia Gandhi, is the current leader of the Congress and Rahul Gandhi, her son and Mr Nehru's great-grandson, is leading the party's campaign to take on Mr Modi at the general elections, due to be held before May.

Prime Minister Manmohan Singh, who was with Mr Modi at the public function, said: "I am proud and happy that I belong to a political party to which Sardar Patel was attached. Sardar Patel was totally secular, and believed in the unity of India."

The cost of the 182-metre iron and bronze statue has been widely criticised as being unnecessary in a nation where one-third of the 1.2 billion people live in poverty. It is to be financed by the Gujarat government and public donations.

"We're turning the whole of India into a necropolis," said Mohan Guruswamy of the Delhi-based think tank the Centre for Policy Alternatives.

A Gujarat government official involved in the project said it would be partially funded by small contributions with the Gujarat government making up the difference. He denied it was a waste of funds, calling it 'icon-based' development that would attract tourism.

The sub-text to the controversy is what legacy Sardar Patel left when he died in 1950, and which of India's two main parties can lay claim to it.

Some historians have suggested Sardar Patel was more pro-Hindu than Mr Nehru, who was fiercely secular and opposed to the 1947 partition of British-ruled India into the independent nations of Hindu majority India and Muslim Pakistan. Sardar Patel is said to have taken a more pragmatic view and is known as the builder of modern India for cajoling and coercing the country's princely states into joining the new republic.

Despite differences with Mr Nehru, the two worked as a team, historians have said. "Each knew the other's gifts, each took care not to trespass on the other person's turf," according to historian Ramachandra Guha. "That is how, together, they built India anew out of the ruins of Partition."

But many people in Gujarat feel Sardar Patel's legacy has been neglected by the Congress party and Mr Modi has been quick to use that to his advantage.

His slogan on television advertisements ahead of Sardar Patel's birth anniversary has been: "Sardar unified the country, and we will glorify it."

Mr Modi's strong association with Hindu religious politics is seen as divisive by critics. Many of them hold him responsible for religious riots that killed at least 1,000 people, mainly Muslims, in Gujarat in 2002, although he has denied the charges.

A Supreme Court appointed panel did not find evidence of wrongdoing by Mr Modi in the riots.

Opinion polls say the Gujarat Chief Minister is more popular than Rahul Gandhi and he is favoured by India's business titans for his pro-investment policies and fast economic growth in his state.

Promoted
Listen to the latest songs, only on JioSaavn.com
"Patel repudiated the RSS. But it's equally true that Congress repudiated Sardar Patel," said Guruswamy of the Centre for Policy Alternatives.