Modi Government A "National Disaster", Must be Voted Out: Sharad Pawar

The Modi government is a national disaster and will now resort to all kinds of foul play to stick to power. 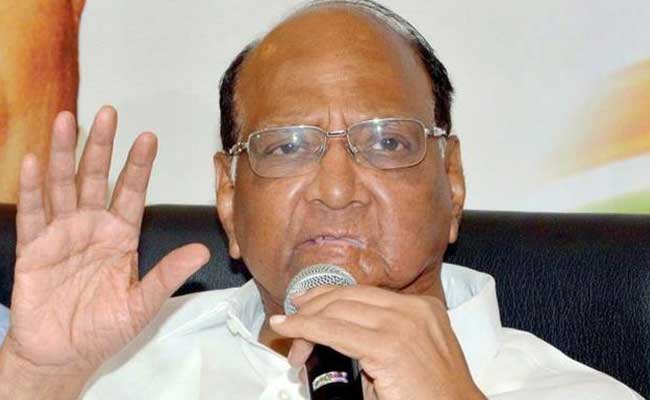 Mr Pawar said if BJP comes back to power, the country will be pushed towards a "dictatorship".said

"The Modi government is a national disaster and will now resort to all kinds of foul play to stick to power. All the NCP workers must remain vigilant against their tactics and prevent them from returning," Mr Pawar told party activists.

He said that after the BJP lost last year's assembly elections in three states - Rajasthan, Madhya Pradesh and Chhattisgarh, "PM Modi had understood the change in the mood of the electorate".

Accusing the Prime Minister of "limited vision", Mr Pawar also warned that if the BJP comes back to power, the country will be pushed towards a "dictatorship" and its people would be deprived of all democratic rights.

Referring to the recent border crises in the wake of the Pulwama attack which killed 40 CRPF troopers, the NCP chief lamented that now BJP is making efforts to "exploit politically the sacrifices of our soldiers" in the elections.

"PM Modi has forgotten the contributions of (the late Prime Minister) Indira Gandhi, who created not only history, but also geography, when she severed Pakistan into two and created Bangladesh. The contributions of Prime Ministers Pandit Jawaharlal Nehru, Indira Gandhi and Rajiv Gandhi cannot be ignored... Modi must exercise restraint when he is talking about them," he said.

He pointed out that after the Pulwama crisis, the country's entire Opposition assured the government of full support and stood behind it to tackle the enemy across the borders.

"It was the brave soldiers who sacrificed their lives for the country, and the Indian Air Force which gave a fitting reply. But now the BJP is running around claiming credit for the work of the armed forces. What was the BJP's contribution?" Mr Pawar asked.

Asking NCP workers to keep a strict watch on the Electronic Voting Machines, he said he did not doubt the EVMs, but the motives of the BJP governments at the Centre and the states.

He also accused the government of complete failures on all policy fronts in the past five years, whether it be farmers issues, unemployment, or corruption, and called for a united challenge to uproot it.

They met and consoled the family members and paid homage to Mandavgane, who was cremated with full military honours last Friday.