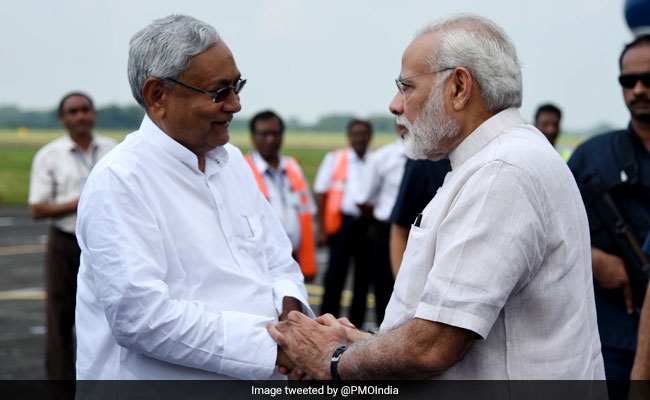 Patna: There was no plan to include the Janata Dal (United) in Sunday's reshuffle of Prime Minister Narendra Modi's council of ministers, Bihar Chief Minister Nitish Kumar said today, accusing the media of "dragging the JD(U)'s name in the reshuffle event."

Nitish Kumar's JD(U) joined the BJP's national coalition about two weeks ago and there was intense speculation that at least two of its leaders would be inducted into PM Modi's team in yesterday's revamp. But only nine new ministers took oath, all from the BJP. Sources close to the Bihar Chief Minister had said he was "disappointed" that there was "no call from PM Modi" to discuss changes in the government.

"There was no talk, no thought at all. If you are going to speculate, at least ask the JD(U) first; our way of working is transparent," Mr Kumar said today, denying that there was ever a plan for his party to join the central government in this round.

As changes in ministries were announced and new ministers took oath on Sunday, opposition leaders taunted Nitish Kumar. Lalu Yadav, dumped by Mr Kumar earlier this year, said, "He did not even get invites for today's swearing-in," adding, "One who betrays his own people will not be taken in by others."

"Spare a thought for Nitish Kumar ji who was the bee's knees in the UPA & now only hears of union cabinet reshuffles through the media," said Omar Abdullah, whose National Conference is part of an 18-party opposition bloc led by the Congress and which Nitish Kumar opted out of as he partnered with the BJP.

In July this year, Nitish Kumar had dissolved his alliance with Lalu Yadav's RJD and the Congress in Bihar and set up government in partnership with the BJP. Last month his party also joined the BJP-led National Democratic Alliance and he reportedly wants two berths in PM Modi's team, one of them of Cabinet rank. The Janata Dal (United) has two Lok Sabha MPs and 10 members in the Rajya Sabha.

Another BJP ally, the Shiv Sena, today described the reshuffle as the "BJP's internal affair" and took a swipe at its ally saying in an an article in its mouth piece Saamna saying experiments continue even after three years of the Narendra Modi government. People are still waiting for 'achhe din', the Shiv Sena said in the editorial.

Promoted
Listen to the latest songs, only on JioSaavn.com
The Shiv Sena has just one minister in union council of ministers and has for long said that is disproportionate representation as it has more members in the Lok Sabha than any other BJP ally. The Sena's ministers did not attend yesterday's oath ceremony of new minsters and those promoted to cabinet rank.

BJP sources have said there will be another cabinet expansion soon to include allies.