#MeToo Movement: MJ Akbar said in a statement that he would "seek justice in a court of law" in a "personal capacity". 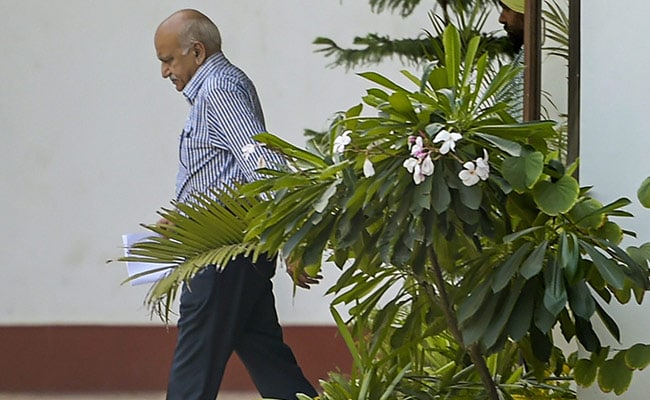 MJ Akbar has filed a defamation suit against a journalist who accused him of sexual harassment. (File)

As many as 20 women have accused MJ Akbar of sexually harassing them when he worked as a journalist. Mr Akbar has filed a defamation case against a senior journalist, who accused him of sexual misconduct.

Here are the highlights on MJ Akbar's resignation:

Oct 17, 2018 21:38 (IST)
President Ramnath Kovind has accepted MJ Akbar's resignation, say sources
Oct 17, 2018 19:54 (IST)
Top government sources have said that the decision was taken by MJ Akbar himself. He will remain in the BJP.
Oct 17, 2018 19:17 (IST)
Prime Minister Narendra Modi has accepted resignation of Minister of State For External Affairs MJ Akbar, say sources
Oct 17, 2018 19:07 (IST)
Congress spokesperson Priyanka Chaturvedi lauded the women for their courage.
"This resignation is a vindication of the power of truth. More strength to India's women," she said.
"The resignation of MoS External Affairs MJ Akbar after serious charges were levelled against him by senior women journalists who worked with him is a vindication of the power of truth even if it began with one brave person speaking up," she added.
Oct 17, 2018 18:38 (IST)
The National Commission for Women has welcomed Union Minister MJ Akbar's resignation.

Oct 17, 2018 18:21 (IST)
"Mere resignation by Akbar is not sufficient considering gravity of allegations against him. Criminal proceedings must be started against him": AAP's Dilip Pandey
Oct 17, 2018 17:35 (IST)
Opposition was asking him to resign on moral grounds. This is a right decision taken by him. The allegations on him should be properly investigated: Union Minister Ramdas Athawale
Oct 17, 2018 17:28 (IST)
Senior journalist Saba Naqvi reacted on Twitter after MJ Akbar's resignation.

Oct 17, 2018 17:21 (IST)
Just two days ago, MJ Akbar had sued one of his 20 accusers, Priya Ramani, for defamation, accusing her of "intentionally making fabricated allegations" to harm his reputation.
Oct 17, 2018 17:18 (IST)
Priya Ramani, the journalist against who MJ Akbar has filed a defamation case, said she as a woman felt vindicated. She wrote on Twitter: "As women we feel vindicated by MJ Akbar's resignation. I look forward to the day when I will also get justice in court. "
Oct 17, 2018 17:05 (IST)
"I am deeply grateful to Prime Minister Shri Narendra Modi and to the external Affair Minister Smt Sushma Swaraj for the opportunity they gave me to serve my country": MJ Akbar
Oct 17, 2018 17:05 (IST)
"I have, therefore, tendered my resignation from the office of Minister of State for External Affairs," MJ Akbar said in a statement.
Oct 17, 2018 17:04 (IST)
"Since I have decided to seek justice in a court of law in my personal capacity, I deem it appropriate to step down from office and challenge false accusations levied against me, also in a personal capacity": MJ Akbar