Mike Pompeo said this during his address to a Washington audience that included Google's Indian-American CEO Sundar Pichai and top corporate executives from India and the US at the India Ideas Summit on Wednesday. 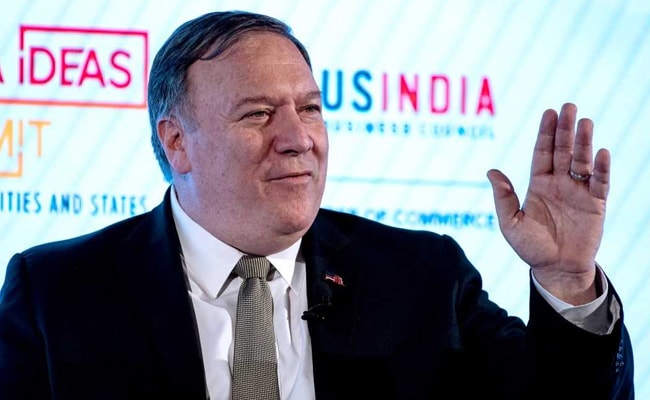 Mike Pompeo opened up about his time as a businessman, before he ran for Congress (AFP)

Ahead of his visit to India, US Secretary of State Mike Pompeo has revealed that he had a "tough" time as a businessman in Chennai and Bengaluru while trying to sell machine parts for the aerospace industry in the country.

Mike Pompeo said this during his address to a Washington audience that included Google's Indian-American CEO Sundar Pichai and top corporate executives from India and the US at the India Ideas Summit on Wednesday.

Mike Pompeo will travel to India, Sri Lanka, Japan and South Korea from June 24 to 30.

Responding to a question, Mike Pompeo said that as a businessman, before he ran for Congress, he had spent some time in Chennai and Bangalore trying to sell products to the Hindustan Aeronautics Limited (HAL), India's leading public sector aerospace and defence company.

"I didn't tell the story - I did business in India when I - before I lost my mind and ran for Congress, I ran a small business that made machine parts for the aerospace industry.

"And I spent a fair amount of time in Bangalore and in Chennai working with HAL - with Hindustan Aeronautics Limited - to sell products we - a small joint venture," the 55-year-old Secretary of State said at the event hosted by the US-India Business Council .

"I'll tell you what. It was tough," Mike Pompeo told the audience.

Prior to joining the Trump Administration, Mike Pompeo was serving in his fourth term as congressman from Kansas' 4th District.

Prior to his service in Congress, Mike Pompeo founded Thayer Aerospace, where he served as CEO for more than a decade. He later became President of Sentry International, an oilfield equipment manufacturing, distribution, and service company, according to his profile on the website of the US Department of State.

"India was still opening up, it was still figuring its way through, but there was a real value proposition there, and we did well," he said recollecting his experience in India as a businessman.

"When I think about that, when I think about what businesses need when they go to invest in each other's countries, they need stability, they need a set of rules that they can understand, they need to make sure that the efforts that we put forward together from the United States have sufficient bipartisanship, that they won't be whipsawed, as we have elections here," he said.

Though Indo-US relation was moving ahead well, differences remain in some of the key trade and business issues, he acknowledged.

"But we remain open to dialogue and hope our Indian friends will drop their trade barriers and trust in the competitiveness of their exporters and private-sector companies," he said.

Mike Pompeo said the US will also push for the free flow of data across borders - not just to help American companies - but to protect data and ensure consumer privacy.

The Reserve Bank of India last year issued a new regulation requiring payments companies to store all information about transactions involving Indians solely on computers in the country. The US has criticised the move.