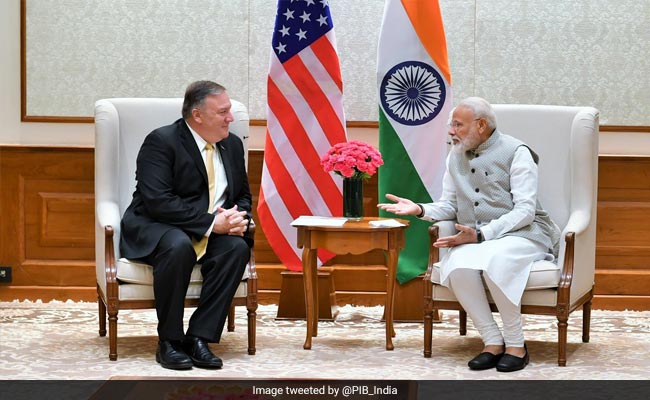 US Secretary of State Mike Pompeo met with India's top leadership on Wednesday, but despite displays of amity, they apparently failed to resolve any of a growing number of differences between the two countries.

Mike Pompeo and external affairs minister, Subrahmanyam Jaishankar, were a study in cordial disagreement as they talked to reporters after a meeting lasting two hours.

Both spoke glowingly of the ties of friendship and common values, but could not paper over the differences that divide them. Neither offered a single example of an issue where they bridged the gap, from India's purchase of a Russian missile defense system to trade disputes that have bubbled over into a small trade war.

"We are friends and we work together," said Mr Pompeo, who praised the bilateral relationship as reaching new heights. "In any relationship that I've been part of as secretary of state, I've never found a partner and ally no matter how close, where we didn't have places where you've had to work through things.

Mr Jaishankar said he and Mike Pompeo had discussed energy and trade, reconciliation efforts in Afghanistan and tensions in the Indo-Pacific region. But he parried a question about India's procurement of the S-400 missile defense system from Russia, a deal that risks triggering U.S. sanctions. New Delhi is seeking a waiver so it can go ahead with the $5 billion purchase.

"We have many relationships," he said, but added, "we will do what is in our national interest, and part of that strategic partnership is the ability of each country to comprehend and appreciate the national interest of the other."

Mike Pompeo came to India hoping to smooth over a rough patch in the relationship between the world's two largest democracies. His main task was to reduce the temperature on a number of issues that threaten the economic and political ties both diplomats praised highly.

For the early part of the Trump administration, India mostly escaped US President Donald Trump's concern over unequal trade. In the past month, however, they have been engaged in the early stages of a trade war.

The announcement came one day after Prim Minister Narendra Modi was sworn in for a second term following a resounding reelection victory - timing viewed with some bitterness in New Delhi. Within weeks, India hiked tariffs on 28 US products including almonds, apples, lentils, bolts and rivets. India is also moving ahead with plans to force global companies to store data locally and to further regulate e-commerce, steps that U.S. firms view with alarm.

India, however, is bristling at an expanding list of demands from Washington. The United States instructed India to cease buying oil from Iran, and India complied. The United States has also told India to block imports of next-generation cellular technology from China's Huawei Technologies, something India is considering.

Mike Pompeo's visit never was likely to produce major announcements, said Richard Rossow, a senior adviser at the Center for Strategic and International Studies in Washington. The best outcome would be if "both sides agree in private not to make things worse," he said.

In theory, there should be space for conciliatory gestures. PM Modi's thumping election victory gives him room to maneuver. But it may also mean he is in no mood to be pushed around, given the mandate he just received from voters. Experts in India say that the US needs to take India's interests seriously if it wants to forge an enduring partnership.

"The US can't be harming India and still saying it's a strategic partner," said Navtej Sarna, a former Indian ambassador to the United States.

In a speech at the Indian International Center, attended by Indian diplomats, Mike Pompeo began with the customary Indian greeting, "Namaste," then outlined what he called a "new age of ambition for our two proud nations."

He called it a misconception that Cold War-era distrust still lingers between Washington and New Delhi. He praised India for supporting the US and many of its foreign policy positions, from providing $3 billion in aid to Afghanistan, stopping oil purchases from Iran and following U.S. sanctions on North Korea.

"We welcome your assertiveness, because it's good for the world," Mr Pompeo said. "It's why we have for years supported you for a permanent seat on the U.N. Security Council."

Mike Pompeo called for closer cooperation on a number of issues dear to the Trump administration.

He asked for India to do more to push against China's dominance in the South China Sea, providing safe navigation for oil tankers traversing the Strait of Hormuz and reducing trade barriers.

"I'm very confident a solution can be found," he said. "One that will honor President Trump's call for fair and reciprocal trade and benefit the citizens of India and the United States alike."