It all came together with one scrumptious plate of Indian food that Mia Khalifa shared with her followers. 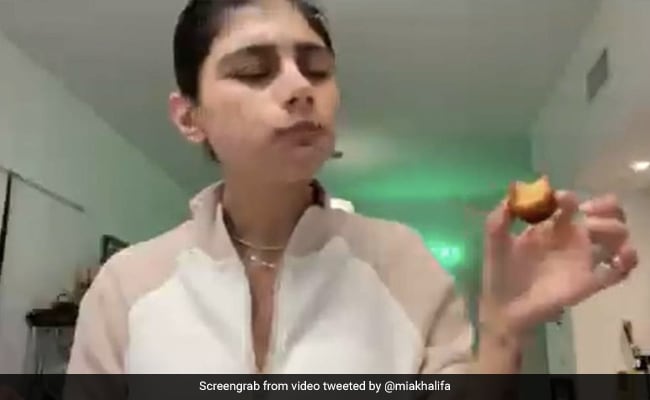 What do former adult film actress Mia Khalifa, model Amanda Cerny, poet Rupi Kaur and Canadian parliamentarian Jagmeet Singh have in common? They don't think very highly of conspiracy theorists who say a galaxy of international stars is part of a campaign to defame India by supporting the two-month-long farmers' protest against the government's new agricultural laws.

All four of them came together on Twitter on Friday to ridicule those who have been floating the idea that lending support to the farmers' movement and the ensuing government crackdown is aimed at defaming India.

It started with this tweet from Mia Khalifa, one of the many people who have been accused without evidence of taking money from Sikh separatists to support Indian farmers.

Wouldn't we have to hashtag “#ad” if we were paid by the Indian government, @AmandaCerny? Or am I missing a new SEC rule that excludes us?

To which Amanda Cerny, who too voiced her support for the farmers' cause on Twitter, wrote:

This is all such a tease. I have so many questions... Who is paying me? How much am I getting paid? Where do I send my invoice? When will I get paid? I've tweeted a lot.. do I get paid extra??!??#lwantThisToBeAnAdhttps://t.co/KpMcbymZOr

That's when Rupi Kaur jumped in to help them with some context.

they think we diasporic sikhs are paying y'all @AmandaCerny@miakhalifa ???????????? on that note what's your venmo?? i got some more tweets for y'all ???? https://t.co/F5Eexnyvdf

I promise to pay it forward by putting it towards supporting a local Indian restaurant for dinner tonight ♥️ https://t.co/j3yNFqkUiV

dinners on me tonight ???? sending the details in dms @miakhalifa@AmandaCerny ♥️ https://t.co/Uw0B2nJW2C

Canadian MP and leader of the New Democratic Party Jagmeet Singh also did his bit:

It all came together with one scrumptious plate of Indian food that Mia Khalifa shared with her followers.

Thank you @rupikaur_ for this beautifully harvested feast, and thank you @theJagmeetSingh for the Gulab!!! I'm always worried I'll get too full for dessert, so I eat it during a meal. You know what they say, one Gulab a day keeps the fascism away! #FarmersProtestspic.twitter.com/22DUz2IPFQ

All those involved in this epicurean escapade and others like pop star Rihanna and climate activist Greta Thunberg have annoyed the Indian government over the last week by helping renew international attention on the farmers' protest.

The stars have faced a backlash led by some Indian celebrities like actor Akshay Kumar and former cricket Sachin Tendulkar who posted government-backed hashtags to paint their support as interference in India's domestic affairs and propaganda.

Angry at what they see as legislation that helps private buyers at the expense of growers, tens of thousands of farmers have been camped on the outskirts of New Delhi since late November, calling for the withdrawal of laws introduced in September.