The RJD, Bihar's main opposition party, has attacked Chief Minister Nitish Kumar for appointing Mewalal Choudhary, who faces allegations of corruption, as a minister in his cabinet. 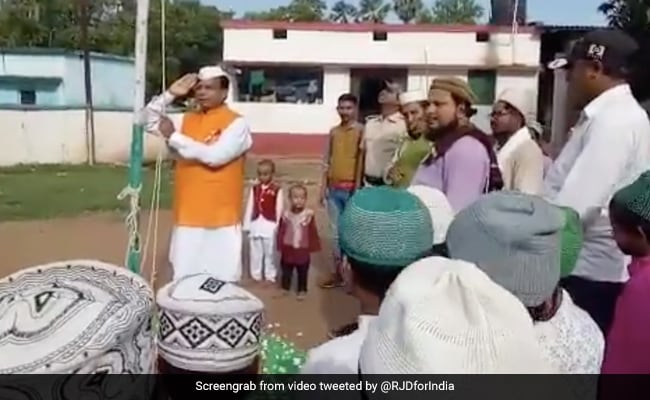 Mewalal Choudhary, 67, has been accused of corruption.

A video of Bihar's newly-appointed Education Minister Mewalal Choudhary, struggling to get the lines of the national anthem during a flag-hoisting ceremony, was shared by the Rashtriya Janata Dal (RJD) on Wednesday.

The RJD, Bihar's main opposition party, has attacked Chief Minister Nitish Kumar for appointing Mr Choudhary, who faces allegations of corruption, as a minister in his cabinet.

The undated video shared by the RJD shows Mr Choudhary botching up the lines of the national anthem and singing incorrect lines at a flag-hoisting ceremony. He was surrounded by children and a few adults as he saluted the national flag.

Towards the end of the 38-second clip, he is seen saying "Bharat Mata Ki Jai" and "Vande" as the children say "Mataram".

"Bihar Education Minister Mevalal Chaudhary, accused in several corruption cases, does not even know the national anthem. Nitish Kumar-ji, is there any shame left? Where did the conscience sink?" the RJD tweeted in Hindi.

Mewalal Choudhary, 67, was suspended from the Nitish Kumar-led JD(U) in 2017 after a case was registered against him over alleged irregularities in appointments during his tenure as the Vice Chancellor of the Bihar Agriculture University in Bhagalpur district.

Mr Choudhary, however, has dismissed as baseless all allegations against him related to corruption in construction and irregularities in appointments to posts of assistant professor and junior scientist.
"No. Never. I have not written anything (about corruption in my election affidavit). I don't know where you get this information. I am the informer, I know. No one is above the law and a case is pending in the court. Not even a chargesheet has been filed. The probe is ongoing. Nothing has happened," Mr Choudhary said when NDTV said his election affidavit stated that a case of corruption has been filed against him.

In a series of tweets, Tejashwi Yadav accused Nitish Kumar of appointing "criminals" to retain power in state.

"Power is protecting criminals... Chief Minister Nitish Kumar has granted exemption to loot and robbery by appointing Mewalal Chaudhary... the Chief Minister will continue his discourse on Crime, Corruption and Communalism to save his chair... None of the minority communities were made ministers," Mr Yadav, 31, tweeted.