Delhi Metro Services Resume: The Delhi Metro trains started today with strict safety and social distancing measures in place. Chief Minister Arvind Kejriwal said "we all should not be negligent in taking precautions". 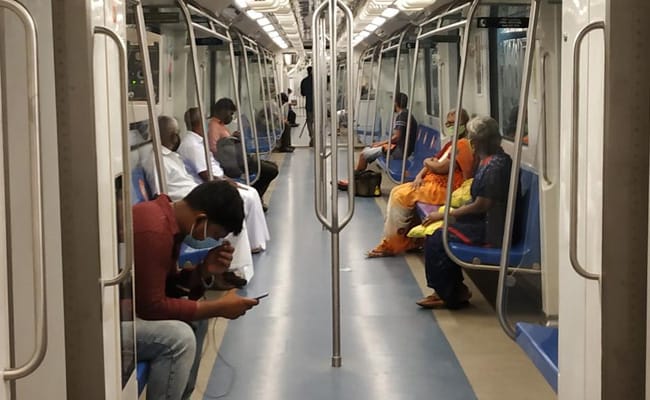 Metro resumes image: Passengers inside a compartment in Chennai

Metro Services Resume: Metro trains in Delhi and other cities across India started today nearly after six months. The Metro services were closed after the first country-wide COVID-19 lockdown was announced in March end to check the spread of the infection. The Delhi Metro started today with limited operation of the Yellow Line. The services resumed at 7 am with strict safety and social distancing measures in place. Delhi Chief Minister Arvind Kejriwal took to Twitter and said, while he is "happy that the Metro is starting from today and "good arrangements" have been made, the Chief Minister put in a word of caution and said "we all should not be negligent in taking precautions".

A few happy faces from our first journey after more than 5 months. #MetroBackOnTrackpic.twitter.com/mIuVK9wHGp

People taking the #DelhiMetro on the first day of resumption of services say, "It is a very good move. Metro rail helps save time and money. Passengers need to take all precautions while travelling. Service hours should be gradually extended." pic.twitter.com/f6I3Z2aGxH

In Chennai, some of the key SOPs in place are contactless ticketing, social distancing and frequent sanitisation in compartments.

It's a new dawn, a new day and we are feeling good. Have a safe journey with Kochi Metro.#Metrocares#KochiMetropic.twitter.com/nE5Is6XMFq

Trains will operate between 8-11 am and 4:30-7:30 pm with a frequency of five minutes pic.twitter.com/4jc4ihwnqi

Metro trains started operating in the Uttar Pradesh capital from 7 am. Authorities said, all preventive measures against COVID-19 have been taken.

Lucknow Metro services have resumed from 7am today, following preventive measures against #COVID19pic.twitter.com/mGCCmB23N7

The Home Ministry had recently issued guidelines allowing Metro services in the country to resume operations in a graded manner. To ensure contactless travel in Metro, tokens are not being issued. Only smart cards are allowed, which can be recharged through digital payment methods. Wearing masks are mandatory inside the stations and coaches. To maintain strict social distance, the commuters will have to sit on alternate seats. The Delhi Metro Rail Corporation has put posters to mark seats where commuters can't sit. According to the new rules, only three people are allowed at a time in a lift and commuters will have to maintain a one step gap on escalators. The stoppage time of trains on at stations has also been increased to ensure social distancing between travellers while boarding and de-boarding trains. There will be no stoppage at containment zones.