Home Minister Rajnath Singh says, all parties who plan to tie up with the Congress will be wiped out. 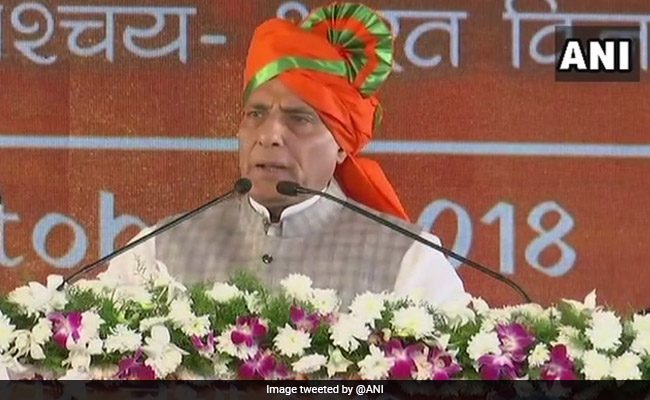 Home Minister Rajnath Singh's #MeToo analogy to attack the Congress party and warn the opposition parties against an alliance for the national election next year has triggered a controversy.

The union minister said that "whichever party has aligned with the Congress has failed". "Let's hope all opposition parties don't form an alliance with the Congress only to be betrayed later. They might be forced to start their own #MeToo campaign against the Congress," the Home Minister said in Hyderabad today, with a reference to the movement that has empowered women to call out their harassers at workplaces.

Mr Singh is heading a committee of a group of ministers that will address the issue of sexual harassment at workplace and draw a comprehensive plan to prevent it.

While many accused the union minister of "mocking the movement", others feel that the reference is wrongly placed.

"So HM Rajnath Singh is making fun of women's movement #MeToo, frustration is very much visible on the faces & in the language of BJP leaders," said a Twitter user.

Shutapa Paul, one of the 19 women journalists who have accused Mr Singh's former colleague MJ Akbar of sexual harassment, tweeted, "Disappointing comments from Rajnath Singh who is part of the GoM set up by the govt to look at existent sexual harassment laws." Mr Akbar, who has denied any wrongdoing, had to step down earlier this month as the outrage swelled.

Kanika Gahlaut, another journalist who had signed a joint statement against the editor-turned-politician, said, "Rajnath Singh heading a panel on sexual harassment following #metoo declares #metoo a conspiracy by embittered people!"

Before anyone think Rajnath Singh mocked #MeToo, here is how #MeToo helped Women getting Justice

The MeToo movement, which began in the US more than a year ago after the Harvey Weinstein scandal, gained traction in India last month after former actor Tanushree Dutta accused her co-star Nana Patekar of sexual harassment. Since then, several men in the media, entertainment, political and art worlds have been accused of offences ranging from sexual harassment to rape.