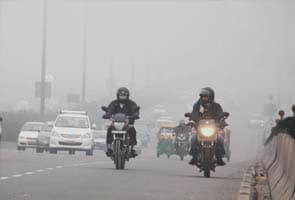 New Delhi: Cold wave persisted in North India with mercury staying below normal in most parts on Monday even as Jammu and Kashmir got some respite from freezing conditions following snowfall in the valley.

In Jammu and Kashmir, a spell of dry and intense cold conditions was broken as some parts of the Valley received light snowfall on Sunday night, bringing considerable improvement in the temperatures.

Much to the relief of residents, night temperature across the valley rose by several degrees, though it stayed at sub-zero level.

The minimum temperature in summer capital Srinagar was just a little below the freezing point at -0.4 degree Celsius, an increase of over four notches from Sunday's minimum of -4.8 degree Celsius.

The minimum temperature in Pahalgam hill resort in south Kashmir increased by over six degrees to settle at -5 degree Celsius from the previous night's -11.4 degree Celsius, the spokesman said, adding the resort received a snowfall of 4 cm.

National capital Delhi had a partly cloudy day with cold winds blowing across the city and minimum temperature remaining below normal.

The night temperature dropped to 6.7 degrees Celsius from Sunday's seven degree Celsius, while maximum temperature remained one notch above normal and was recorded at 22.3 degree Celcious, according to MeT department.

The city witnessed shallow fog in the morning which precipitated away as the day progressed.

In Himachal, there was a marginal rise in mercury even as cold wave sweeping the hills and valleys persists.

While Manali recorded minimum temperature at 3.0 degree, a rise of seven degree since yesterday, Solan was coldest in non-tribal areas with a low of 0.8 degree Celsius.

Udaipur and some other places in tribal Lahaul Valley had another spell of mild snowfall.

In neighbouring states of Punjab and Haryana, the Sun continued to play hide and seek at several places and cold wave continued unabated.

The minimum temperature in most parts of the region hovered between one to two notches below normal, the MeT office said.

Promoted
Listen to the latest songs, only on JioSaavn.com
In Uttar Pradesh mercury stayed below normal in most places with capital city Lucknow recording the minimum temperature at 2.0 degree celsius.