Antigua Will Cooperate But No Time Frame On Mehul Choksi's Extradition 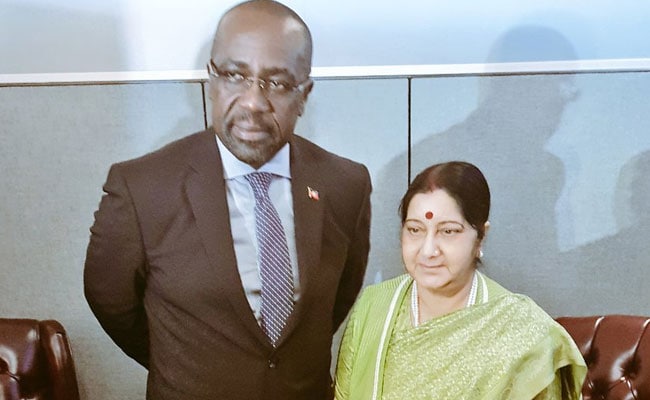 Foreign Minister Sushma Swaraj, who is in New York for the 73rd session of the United Nations General Assembly (UNGA), has spoken with her Antiguan counterpart on the extradition of Mehul Choksi, prime accused in the Rs 14,000-crore Punjab National Bank scam. EP Chet Greene, the Antiguan minister, has assured Ms Swaraj of all cooperation but there are some "legal angles and court procedures", which Antigua will first "examine".

"The External Affairs Minister had requested him that quicker the matter is resolved, the better it is. Her counterpart replied that they're trying their best, he said there are some legal angles and court procedures, which they'll examine but he expressed the commitment of his Prime Minister and government before Sushma Swaraj," said Raveesh Kumar, spokesperson of the foreign ministry.

On being asked whether the two leaders spoke about how long the extradition could take, the spokesperson told NDTV that "these things cannot be given a time frame."

The meeting, on Wednesday, between Ms Swaraj and EP Chet Green was arranged at the request of the Foreign Minister of Antigua. "He personally wanted to tell the External Affairs Minister of the commitment of his PM and his government regarding the extradition of Mehul Choksi," said Raveesh Kumar.

According to the Ministry of External Affairs, Ms Swaraj, during the bilateral meeting, conveyed to Mr Chet Green that there was immense expectation in India regarding Choksi's extradition, since he fled the country after committing a massive fraud. Meanwhile a special court on Wednesday, gave Choksi time till October 30, to file his reply to a notice by the Enforcement Directorate, seeking to declare him a "fugitive" under a new law.