Meghalaya Assembly Speaker Metbah Lyngdoh issued notices to the 12 MLAs after the Congress petition seeking their disqualification from the assembly under rules of the tenth schedule of the Constitution. 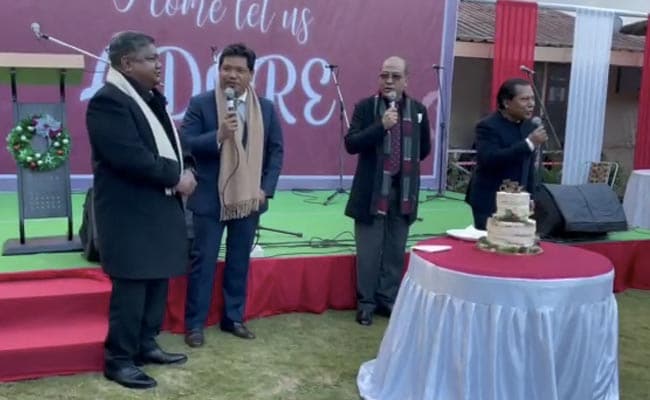 Former Meghalaya Chief Minister and All India Trinamool Congress (AITC) leader Mukul Sangma, who recently switched over to Mamata Banerjee's party along with 12 Congress MLA, said that the decision to switch party was taken to "protect the interests of the people". Mr Sangma also added that the members  "leave it to" the Assembly speaker to decide on a petition seeking their disqualification.

Meghalaya Assembly Speaker Metbah Lyngdoh issued notices to the 12 MLAs after the Congress petition seeking their disqualification from the assembly under rules of the tenth schedule of the Constitution.

"We will leave it to the office of the Speaker and will not presume or assume anything,"Mr Sangma said.

Mr Sangma had switched to Trinamool Congress after a difference with Vincent Pala, the president of Meghalaya Congress.

The 12 MLAs have already submitted before the Speaker their responses to the petition filed by the Congrees leader Ampareen Lyngdoh seeking their disqualification as per the Tenth Schedule of the Constitution.

"The whole exercise has been done in a manner which is inconsistent with the mandate of the relevant provisions of the Constitution. We do not doubt or we do not foresee or anticipate anything contrary to what we expect," Mr Sangma told reporters.

"Therefore whatever we are doing is with complete clarity and without any iota of doubt or confusion so we know what we are doing and what we are doing is because our priority is to protect the interests of the people, the state and enable people to realise their dreams and aspirations base on the kind of faith and confidence that they have upon us," he added.

Ampareen Lyngdoh, who was elected the Congress legislature party leader following the switch over of 12 party MLAs, moved the speaker for their disqualification from the House on various counts under the tenth schedule of the Constitution and Rule 6 of The Members of Meghalaya Legislative Assembly (Disqualification on ground of defection) Rules, 1988.

On November 25, Mukul Sangma along with 11 other Congress MLAs joined Trinamool Congress, making it the principal opposition party in the 60-member House.