21-year-old Ashiq walked through the corridors of North Block where she met Union Home Minister Rajnath Singh today, saying she does not want to "look back".

Afshan Ashiq, once a stone-thrower, is now the captain and goalie of the state women's football team

New Delhi: As a disgruntled student, Afshan Ashiq led other girls in throwing stones at the police on Srinagar streets. Today, the poster girl of stone throwers is the captain of Jammu and Kashmir's women's football team -- a dream transformation that also speaks of the government's success in winning the hearts of Kashmiris.

21-year-old Ashiq walked through the corridors of North Block where she met Union Home Minister Rajnath Singh today, saying she does not want to "look back".

"My life has changed forever. I want to be an achiever and do something to make the state and the nation proud," said Ashiq, whose life story may soon be turned into a biopic.

A renowned Bollywood filmmaker, who for now wishes to remain anonymous, plans to make a film on the tall Ashiq, her team's goalkeeper who is studying B.A. in Srinagar. 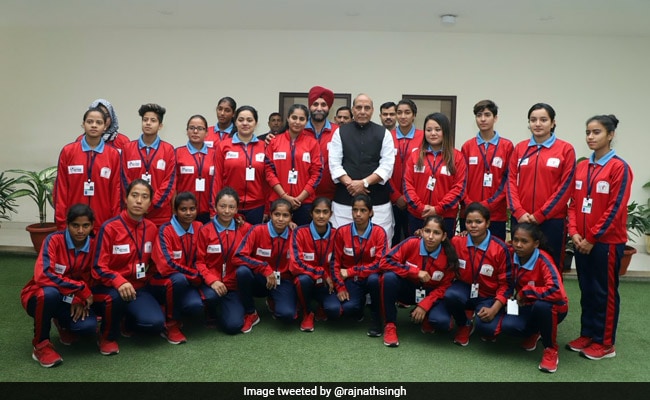 My life has changed forever. I want to be an achiever, make the nation proud, Afshan said

She led her 22-member football team that called on Mr Singh, along with three officials. Ashiq said she was pleasantly surprised to see how he wasted no time in redressing their grievances over the lack of sports-related infrastructure in the state.

"When we told the home minister that Jammu and Kashmir lacks sports infrastructure, he immediately called up the Chief Minister (Mehbooba Mufti) and requested her to do the needful to help us," Ashiq, who is from Srinagar, said.

Ashiq, who defends the 24-foot-long and 8-foot-high goal post for her team, said the youth in Kashmir Valley was talented and all that they required was a platform.

"The minister also told us that Rs 100 crore had already been sanctioned (under the Prime Minister's special package) for the state," the captain of the CM's-XI team told PTI.

She agrees that her life and career had made a remarkable U-turn since the days when her picture was splashed in the national media as a stone pelter.

The same hands that threw stones at the forces now ward off many a hard kick as she guards the goalpost.

During the 30-minute meeting with Mr Singh, the team members conveyed to him that if proper infrastructure -- such as training facilities -- came up in Jammu and Kashmir, the youth could be motivated to hone their talents and bring laurels to the state, staying away from terrorism and other unlawful activities.

Team manager Tsering Angmo said the sports infrastructure in the border areas was particularly poor and needed urgent attention so that young Kashmiris could be weaned away from illicit acts.

"With proper infrastructure in place, the youth can take up sports to nourish their talents and no one can brainwash anyone. No one will join terrorism or indulge in stone pelting," Tsering Angmo, who is from Ladakh, said.

Ashiq and Angmo thanked Mr Singh for listening to them and for speaking to the chief minister about their problems.

Promoted
Listen to the latest songs, only on JioSaavn.com
Later, the home minister tweeted, "Met the young and energetic girls of JK's first ever Women Football Team. They are highly motivated and driven when it comes to football."