Mayawati was speaking to reporters after she moved into her new residence vacating her sprawling bungalow in Lucknow on Supreme Court orders. 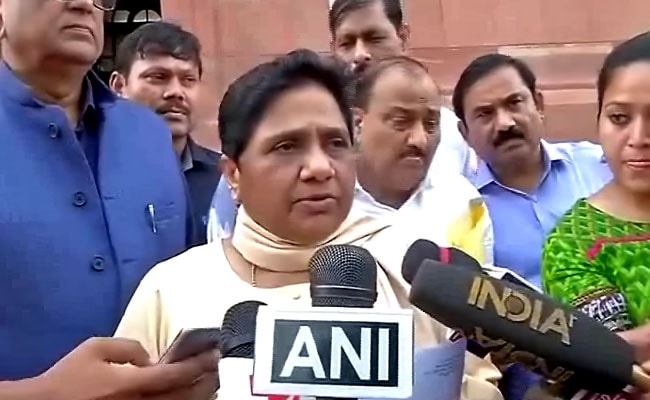 Mayawati said people lost their lives due to demonetisation (File)

Terming mob killings in the name of cow vigilantism as a "blot on democracy", BSP supremo Mayawati today accused the BJP governments of laxity and indifference on the issue.

"The increasing tendency of indulging in mob lynching in the name of cow vigilantism in the BJP-ruled states is a blot on democracy, yet the governments are exercising laxity and are being indifferent to it," Mayawati told reporters here.

"These activities of the BJP governments (against the members of scheduled castes, tribals, backwards, Muslims and Christians) are going on since inception and are result of the BJP's intention to go against the Constitution and maintaining a step-motherly relationship with the Constitution. This has been the part of the basic policy of the BJP, which has assumed alarming proportions after they came to power."

Mayawati was speaking to reporters after she moved into her new residence vacating her sprawling bungalow on Supreme Court orders.

Accusing the BJP of resorting to different diversionary tactics as 2019 Lok Sabha elections are approaching, Mayawati said the party is making lucrative announcements and not leaving any stone unturned to derive advantage from the death of former Prime Minister Atal Bihari Vajpayee.

"...They never followed his (Atal Bihari Vajpayee's) footsteps, when he was alive," she charged.

Mayawati said: "People of the country know that the campaign undertaken by the BJP and the RSS in the name of Vajpayee is an attempt to hide its failures. The BJP will not get any benefit from this. The people of the country now understand that none of the election promises made in 2014 Lok Sabha elections was fulfilled."

Referring to demonetisation, Mayawati alleged it was  implemented in an unplanned manner leading to "financial emergency".

She claimed some persons also lost their lives due to the withdrawal of high value currency notes.

"It exploited the labourers, farmers, small traders and hardworking people. Time has come to seek a report. The BJP has no consolation to offer to the people in the aftermath of demonetisation," Mayawati said.