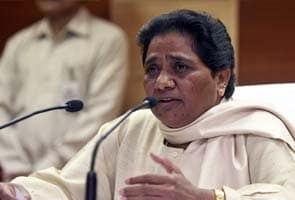 Lucknow: Ahead of Uttar Pradesh Assembly elections, Chief Minister Mayawati today announced formation of three new districts in the state drawing sharp reaction from the Opposition which dubbed the move as politically-motivated.

With these the total number of districts in the state would rise to 75, officials said here.

The step was in line with Dalit icon Bhim Rao Ambedkar's thinking that small units help in better administration, the Chief Minister said in Sambhal.

"BSP has always been in favour of smaller states, and new districts and divisions have been set up in all my previous regimes," she said.

Mayawati said she favoured trifurcation of the state and had written a letter to the Union government in this regard.

However, the Centre "never cared to reply", she added.

Reacting to Mayawati's announcement, BJP state president Surya Pratap Shahi said she did nothing during her rule except building parks and statues.

"Now she wants to gain political mileage ahead of polls by announcing formation of three new districts," he said.