Mayawati Gets No Reprieve From Ban, Top Court "Satisfied" With Action

General elections 2019: Bahujan Samaj Party chief Mayawati had challenged in the Supreme Court a 48-hour ban on campaigning by the Election Commission after she violated the election code

General elections 2019: BSP chief Mayawati was banned from campaigning by EC for 48 hours

Mayawati today challenged the Election Commission's 48-hour ban over a divisive speech in the Supreme Court, but didn't get any reprieve from judges who made it clear they were all for the punishment. "It seems the Election Commission has woken up by our orders and barred various politicians from campaigning for varying timing. This makes it clear no further orders are required now," Chief Justice of India Ranjan Gogoi said.

At a recent meeting in Deoband, Mayawati had warned the Muslim community not to "split votes" between the Congress and her alliance. Appealing to caste or communal feelings to secure votes is banned under the model code, which is a series of dos and don'ts for political parties ahead of elections.

The Election Commission has also barred Uttar Pradesh Chief Minister Yogi Adityanath from campaigning for three days for his communal comments. The saffron-robed Chief Minister had said at a rally, "If the Congress, the Samajwadi Party and the BSP have faith in Ali, then we too have faith in Bajrang Bali". While Ali is revered by Muslims as Prophet Mohammad's successor, Bajrang Bali is another name for Lord Hanuman.

The election body has faced opposition allegations that it is soft on leaders of the ruling party violating the election code.

Among the politicians who were punished by the poll body yesterday were Samajwadi Party leader Azam Khan, who has been barred from campaigning for three days for his "indecent and derogatory" comment against his BJP rival Jaya Prada in Rampur. Union minister Maneka Gandhi of the BJP was also banned from campaigning for 48 hours, for her communal comments. 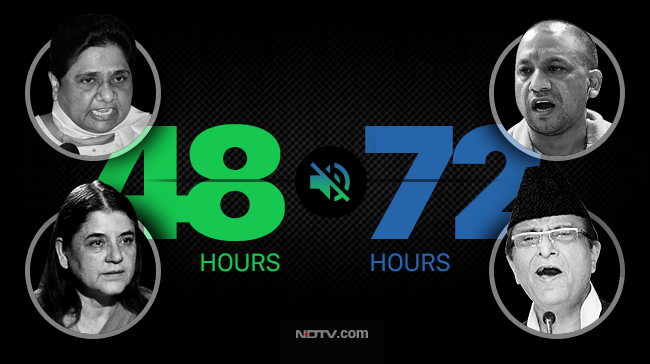 (Left to right) Mayawati, Yogi Adityanath, Maneka Gandhi and Azam Khan have been punished by the Election Comission.

The Election Commission's action came on a day the Supreme Court pulled it up for failing to take action in cases of code violation, and questioned if it was even aware of its powers to force errant political leaders to fall in line.

Asked about the criticism during an interview on Monday, Chief Election Commissioner Sunil Arora told NDTV that while there are options like barring the candidate from the polling process, "I don't think sending an advisory to a person who is a Chief Minister of biggest state, that too in black and white - that is a slap on the wrist".

On Monday, the Supreme Court - which was hearing an appeal seeking action against political parties using use religion and caste to seek votes - was extremely upset when the Election Commission's representative said, "We don't have any powers. We can't bar them from contesting. We can de-recognise them".