Matua Matriarch Binapani Devi passed away in Kolkata's state-run hospital on Tuesday evening after prolonged illness. She is survived by her younger son Manjul Krishna Thakur. 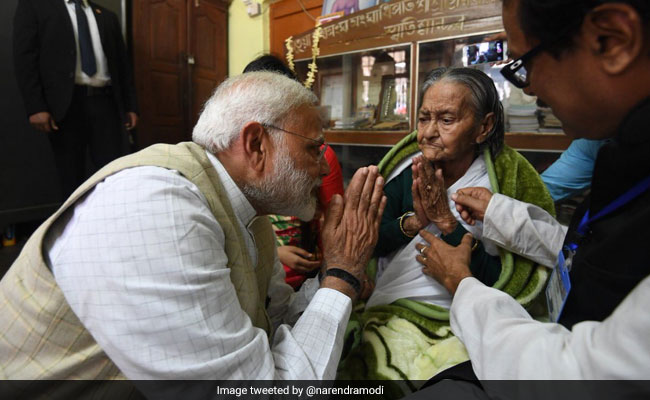 PM Modi had met Boro Ma last month during his visit to Thakurnagar.

The last rites of Matua community matriarch Binapani Devi, popularly known as ''Boro Ma'', will be held today at Thakurnagar in North 24 Parganas district, where her body would shortly arrive from Kolkata.

The centurian passed away at the capital's state-run hospital on Tuesday evening after prolonged illness. She is survived by her younger son Manjul Krishna Thakur.

"We started with her body at around 8 a.m. and reached Thakurnagar at 11 a.m. Lakhs of followers have gathered here to see their beloved Boroma for the last time," a family member said.

Thakurnagar is the headquarters of the Matua Mahasangh, an organisation of the community.

Many members belonging to the scheduled caste community visited the hospital throughout the night to pay their last respects to Binapani Devi, who breathed her last at 8.52 pm, after being on ventilator support at the hospital since Sunday.

Her body is expected to reach Thakurnagar by 11 am, as thousands of followers await to catch a last glimpse of their beloved Boro Ma.

PM Modi had met Boro Ma last month during his visit to Thakurnagar.

Ms Banerjee has announced that Boro Ma will be accorded a state-funeral with gun salute.

The Matuas originally hail from erstwhile East Pakistan, now Bangladesh, and began migrating to West Bengal at the beginning of the 1950s, mostly due to religious persecution.