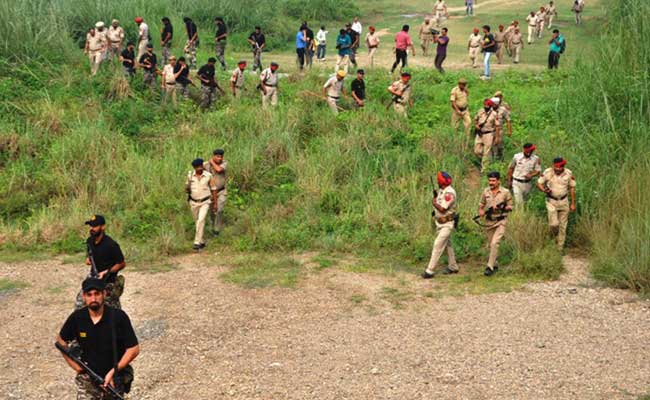 Pathankot: The Pathankot and Gurdaspur districts of Punjab were put on high alert on Wednesday after three 'suspicious' persons went missing after abandoning a robbed SUV at a village in Pathankot. A massive search operation was launched by the police of both the districts to hunt them down. Though nobody has been arrested yet, the police claimed the suspects belonged to Jammu and Kashmir. "We have broadly identified them and we are trying our best to arrest them," Pathankot SSP Vivek Sheel Soni said. The three men had entered the state on Tuesday as they abandoned their vehicle at Makhanpur village near Bamiyal in Pathankot.

They had sped through a police check post barrier at Behrampur in Gurdaspur district after cops signalled them to stop, police said.

When police chased them, they abandoned their vehicle at Makhanpur village in Pathankot after covering a distance of 15 km from Behrampur in Gurdaspur, they said.

The SUV was robbed by the suspects from Sambha in Jammu yesterday, police said.

The search operation in districts of Pathankot and Gurdaspur, involving around 300 cops, lasted for about eight hours, they said.

Nothing suspicious was found from the SUV, police said, adding it has been seized. However, the vehicle had a fake registration number, they said.

To a query, Pathankot SSP said the three men were not dressed in army or police fatigues, as was the case with terrorists in the 2015 Gurdaspur attack.

Promoted
Listen to the latest songs, only on JioSaavn.com
In the first attack, three heavily-armed terrorists wearing army fatigues, had stormed a police station in Dinanagar town of Gurdaspur district in July 2015 killing seven persons, including a Superintendent of Police, before they were gunned down during a day-long operation.

In the second attack, four terrorists who had sneaked in from across the border, attacked the Pathankot air base on the intervening night of January 1 and 2 last year, claiming the lives of seven security personnel.
Comments
Pathankot suspicious menPathankot search ops