The Supreme Court recently passed an interim order staying implementation of 2018 law that granted reservation to the Maratha community. 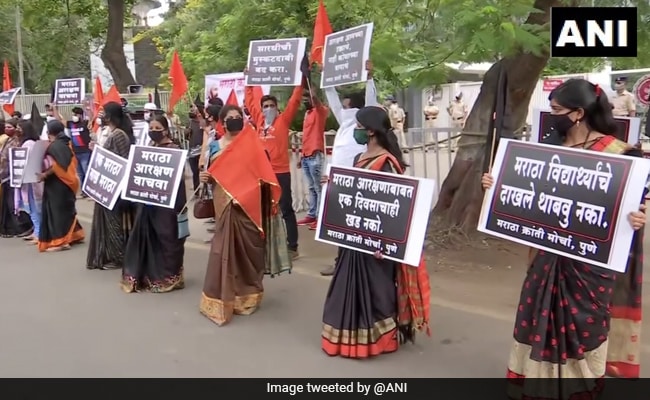 In Pune, members of the Maratha Kranti Morcha protested outside office of district collector

Members of pro-Maratha outfits staged protests in Jalna, Pune Kolhapur on Thursday, demanding that the Maharashtra government take steps to continue reservation for the community in jobs and education.

The Supreme Court recently passed an interim order staying implementation of 2018 law that granted reservation to the Maratha community.

In Jalna, some activists of the Maratha Mahasangh shouted slogans of "Jai Bhavani Jai Shivaji" and "We want reservation", and blocked the way of state Health Minister Rajesh Tope when he came out of a function in Town Hall area.

In Kolhapur, members of various Maratha outfits staged a protest outside the Gokul Milk Union office and warned that they would not allow any milk tanker to go to Mumbai and Pune.

Some protesting members were later detained by police, another official said.

In Pune, members of the Maratha Kranti Morcha wearing black clothes and holding placards over their demands staged a protest outside the office of district Collector Rajesh Deshmukh and submitted a memorandum to him.

"We handed over a memorandum to the district collector and demanded that the state government take all necessary legal steps to lift the ban on the reservation," the Maratha outfit's convener Rajendra Kondhare said.

They also demanded that admissions of students from the Special Economically Backward Class (SEBC) done before the stay be secured and concessions granted to students from that category should continue, he said.

They also demanded speedy justice in the Kopardi rape and murder case.

A Class 9 student belonging to the Maratha community, was found brutally killed after being raped in July 2016 at Kopardi village in Ahmednagar district.

Three culprits, all Dalits, were awarded death sentence by a sessions court in Ahmednagar in November 2017.

The sentence is yet to be confirmed by the Bombay High Court.