The Manipur bridge is part of a new broad gauge line being constructed to connect the northeastern state with the rest of the country and the pillars have already been built. 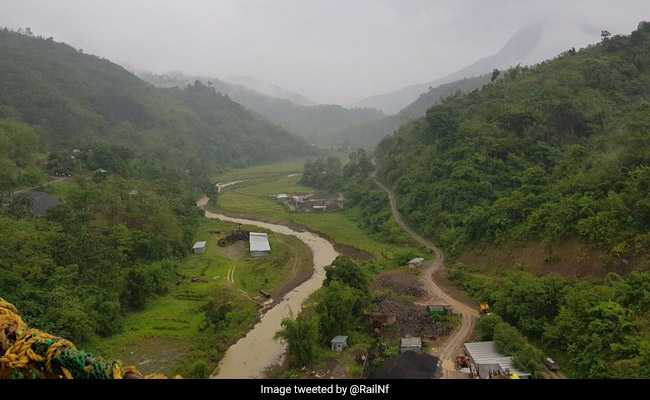 The bridge has 45 tunnels in the project with the longest one being 10.280 km.

Northeast Frontier Railway said on Saturday it is constructing the tallest railway bridge of the world in Manipur at 141 metres surpassing the existing record of 139 metre Mala-Rijeka viaduct, at Montenegro in Europe.

The bridge is part of a new broad gauge line being constructed to connect the northeastern state with the rest of the country and the pillars have already been built.

"The bridge is being constructed across the valley of river Ijai near Noney with a pier height of 141 metre. It will surpass the existing record of 139 metre of Mala-Rijeka viaduct, Montenegro in Europe," NFR Senior Public Relations Officer SK Ojah said in a statement.

The bridge is part of the 111-km long Jiribam-Tupul-Imphal new broad gauge line project in Manipur, he added.

"The total length of the bridge will be 703 metre. The piers of the bridge are constructed using hydraulic augers. The tall piers needed specially designed 'slip-form technique' to ensure efficient and continual construction," Mr Ojah said.

The steel girders are pre-fabricated in a workshop, transported in segments and erected at the site by Cantilever launching scheme, he added.

"Self-erecting electric lifts are used at each pier for the safe and speedy conveyance of men and materials to the top," NF Railway said.

There are a total of 45 tunnels in the project. The longest is Tunnel No. 12 with a length of 10.280 km. "This will be the longest railway tunnel in the North East," the official said.

He said the project picked momentum in the last three years due to its importance as a National Project.